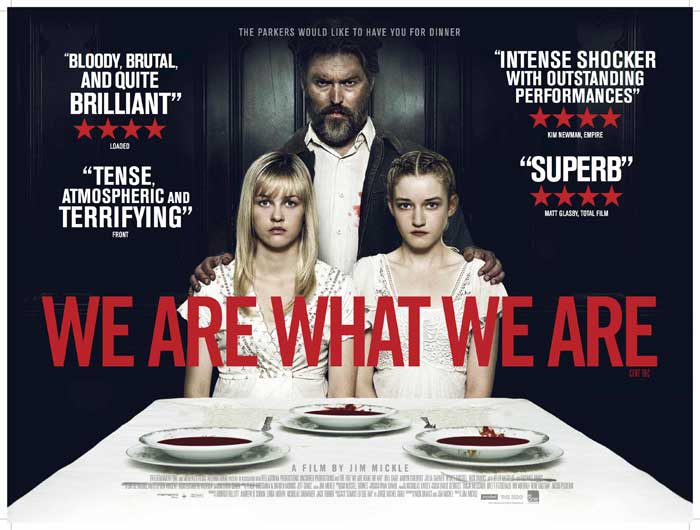 We Are What We Are Advance Screening

INVITES YOU AND A GUEST TO A SPECIAL ADVANCE SCREENING

Story: In WE ARE WHAT WE ARE, a seemingly wholesome and benevolent family, the Parkers, have always kept to themselves, and for good reason. Behind closed doors, patriarch, Frank (Bill Sage, “Boardwalk Empire”) rules his family with a rigorous fervor, determined to keep his ancestral customs intact at any cost. As a torrential rainstorm moves into the area, tragedy strikes and his daughters Iris (Ambyr Childers, THE MASTER) and Rose (Julia Garner, MARTHA MARCY MAY MARLENE, SIN CITY: A DAME TO KILL FOR) are forced to assume responsibilities that extend beyond those of a typical family. As the unrelenting downpour continues to flood their small town, the local authorities begin to uncover clues that bring them closer to the secret that the Parkers have held closely for so many years. WE ARE WHAT WE ARE also stars Michael Parks (DJANGO UNCHAINED), Golden Globe Nominee Kelly McGillis (WITNESS), Nick Damici (STAKELAND), Wyatt Russell (THIS IS $)) and newcomer Jack Gore. WE ARE WHAT WE ARE was written by Jim Mickle and Nick Damici. The two previously collaborated on the screenplays for Mickle’s first two features, MULBERRY STREET and STAKELAND (winner of the “Midnight Madness” Audience Award at the 2010 Toronto Film Festival). A re-imagining of the 2010 Mexican film of the same name, director Jim Mickle paints a gripping portrait of an introverted family struggling to keep their macabre traditions alive.

WE ARE WHAT WE ARE in Theaters September 27.

WE ARE WHAT WE ARE

BRING A PRINT OUT OF THIS PAGE >>

Seating is on a first-come, first-serve basis. THIS TICKET DOES NOT GUARANTEE YOU A SEAT. THEATER IS OVERBOOKED TO ENSURE A FULL HOUSE. THEATRE IS NOT RESPONSIBLE FOR OVERBOOKING. NO ADMITTANCE ONCE SCREENING HAS BEGUN.