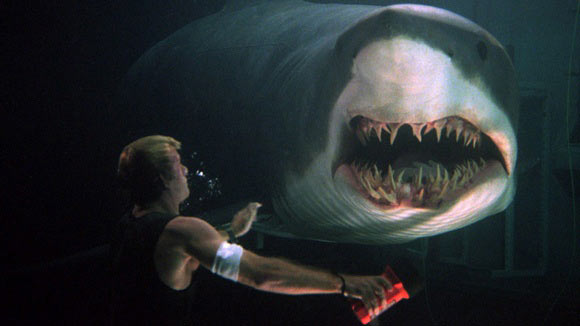 Every summer, I, and anyone else with good taste in television, hunker down for a week full of Discovery Channel’s best shark-filled programming. Shark Week has long since been one of my favorite weeks of the year but I often find myself finishing it and wanting more. Luckily, there are a pretty hefty amount of Shark themed horror films to get one through their post-Shark Week blues. I accept that this is probably one of many “Top Shark Films” lists you will find circulating recently, but I hope I can provide at least some fresh insight into the wonderful world of Sharksploitation.

5.Mako: The Jaws of Death (1976)
When a man learns that he can telepathically communicate with sharks, he vows to protect them at any cost. After the success of Jaws in 1975, many studios and filmmakers began releasing shark films in an attempt to cash in on the breakout hit. However, of all of these cookie cutter releases, one film snuck in with a different agenda. Mako: Jaws of Death is the antithesis of shark films. Although it feels a bit like watching PETA’s response to Jaws, it was a much more realistic representation of sharks than almost any other films in the subgenre. One of my biggest gripes with Jaws and most other films like it, is how much death it ultimately inspired. People began killing sharks in hoards, despite it being a work of fiction. Mako: Jaws of Death is a strange combination of grindhouse revenge film, Sharksploitation and slasher film. The sharks are portrayed as victims, and humans are cruel, insensitive monsters. So really, it is much closer to the truth than a rogue bloodthirsty Great White. 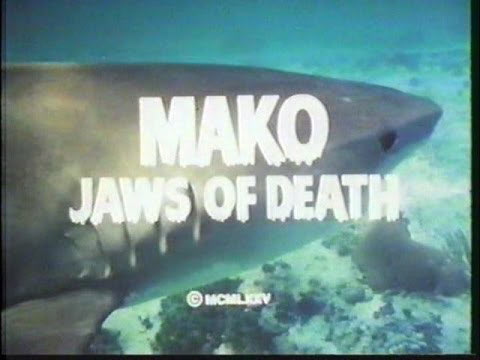 4.Shark Night 3D (2011)
When a group of college kids take a trip to a cabin for Spring Break in the bayous of Louisiana, they begin to realize there may be more than expected waiting for them in the water. One of my favorite types of creature features, are the ones that don’t take themselves too seriously. While I wouldn’t say Shark Night is intelligent enough to be considered self-aware, it is unapologetically fun. It does not try to be anything more than it’s title advertises. It even sets itself apart by concentrating on the larger variety of shark species. This film benefits from a theatrical or group setting, so if you are looking for something for an end of summer viewing party, Shark Night is an excellent choice.

3.The Reef (2010)
This sleek Australian horror film follows a group of twenty-somethings who find themselves stranded when they capsize while sailing a yacht in Indonesia. When they attempt to swim to the nearest island, they discover they are being stalked by a large great white shark. Although this film did not receive a whole lot of attention stateside, it is an underrated addition to the genre. It cultivates and maintains it’s tension all the way through, with understated effects that only help to build the realism and suspense. Ultimately, The Reef was everything I wanted out of Open Water and did not get.

2.Jaws (1975)
Okay, so here is the point when I may start to lose credibility. But let me explain. As a film lover, I would never attempt to argue the brilliance of Jaws, nor would I deny it a place on this list. I will admit that it is easily the most sophisticated title on the list and a rightful classic, but I would not consider it the best shark film. To put it simply, Jaws is not fundamentally a shark film. It is a people film, with a shark in it. This may be a flimsy explanation, since it could technically be applied to any shark movie. However, the amount of screen time the shark actually takes up, is relatively minimal. The bulk of the onscreen drama is with our beloved heroes. With that being said, the opening scene is one of greatest suspense scenes in the history of cinema and John William’s score is legendary. I recently had the opportunity to see Jaws while floating on an intertube and I emphatically support these special event screenings. 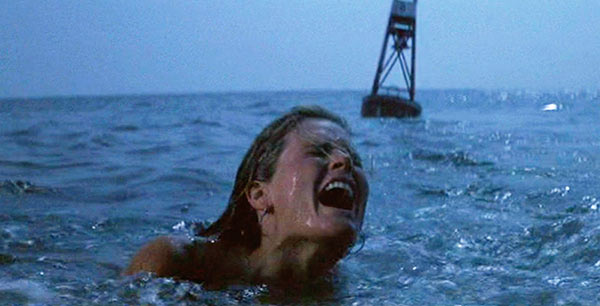 1.Deep Blue Sea (1999) (*Spoilers Ahead*)
On a remote research facility in the middle of the ocean, a group of scientists I’ve said it before, and I’ll say it again: Deep Blue Sea is the perfect Shark Film. Not only is it my favorite Shark film, but it easily ranks on my list of favorite films of all time. Although it may not be the best film on this list, objectively speaking, it is definitely the most satisfying. Any film where Sam Jackson gets eaten halfway through his inspirational speech should be acknowledged for it’s proverbial balls. The casting overall elevates this film from cheesy creature feature to quintessential cult classic. Thomas Jane is in his element as freewheeling shark wrangler, Carter Blake, and LL Cool J, with his top shelf one-liners, are everything this film deserves and more. The film can also be praised because of its ability to create a Shark film that does not necessarily paint sharks as bloodthirsty killers. It gives a reason for the creatures’ onslaught and even recognizes it as being the result of the scientist’s actions. Deep Blue Sea is a perfect product of its time, from its blithe self-awareness to LL Cool J’s themed credit song. I can only hope the rumored sequel can live up to its legacy.

With the recent releases of The Shallows and the well received, 47 Meters Down, shark films prove to be a timeless subgenre that does not seem to be going anywhere. It is important to remember that many species of sharks have found themselves on the endangered species list, in part due to perpetuated fear mongering and misunderstanding. These incredible creatures have been around for thousands of years, persevering through one global catastrophe after another and that demands a certain level of respect. So, as you indulge in a good end-of-summer shark film binge, just remember how awesome and important they are to our oceans and ecosystem.

Here’s to swimmin’ with bowlegged women!