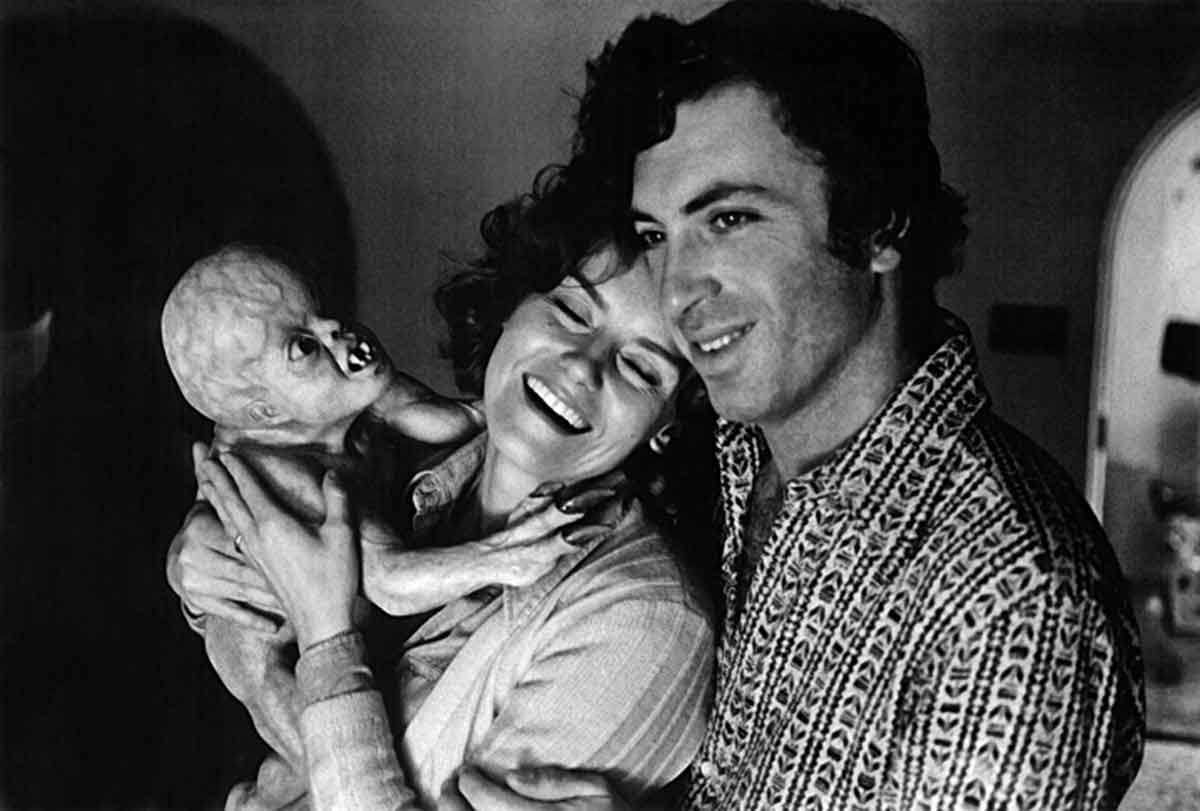 The Spawn of a New Season: Babies of Horror

For the majority of the United States, spring has officially sprung. The weather is getting warmer, flowers are blooming, and the promise of new life is all around us. Death and darkness are in our seasonal rear view mirror. But one of the best things about being a horror fans, is that you have something to watch throughout the cycle of the year. We also often keep our horror viewings relatively seasonal. So what is there for a horror fanatic to watch during this time of oppressive cheerfulness? During a time when you cannot walk into a store without being bombarded with pastels and floral prints? It is a time to delve into more unconventional fears. So in the essence of celebrating the birth of new life, I would like to concentrate on one of my own seasonally appropriate phobias: babies. Specifically, I will be talking about the nightmare inducing kind that you are unlikely to find in a bunny-laden JC Pennies commercial. So here are a few offspring who have been subject to more than a few nightmares:

Dead Alive (1992)
Way back in the days of video stores, I would stalk the shelves of the horror section with my best friend, slowly working our way through the titles one weekend at a time. One of my favorite ways of choosing which film to rent was basing my opinion off of the cover art. I would set these arbitrary challenges for myself: “If I can handle this movie, then next time I’ll rent that one.” For some reason, the picture of the skull protruding from a woman’s mouth that was used for Peter Jackson’s masterpiece Dead Alive (Or Braindead for the kiwis) was the pinnacle of terrifying cover art of my adolescence. Once I finally grew the proverbial balls to rent the film, you can imagine my surprise when it wasn’t the scare-fest that I was expecting. It did, however, open up a world of schlocky fun that ended up being just my cup of tea. Dead Alive stars Timothy Balme as Lionel, a meek mama’s boy who must deal with his overbearing mother after she is bitten by a rare rat-monkey while spying on her son and his date at the zoo. When the woman’s disease begins to worsen and she becomes violent, Lionel must attempt to keep the situation under control as the woman his mother attacked also begin showing signs of the same zombie-like disease. This is one of the films that taught me the power of humor when used as a buffer. For example, you can have a grown man get in a fistfight with a zombie baby in a playground. The zombie baby in question, although not exactly a major plot point, is one of my favorite parts of the film and is the subject of some of its most over the top and hilarious moments. It’s almost hard to believe that the same man who introduced zombie sex, an undead baby, a Sumatran rat-monkey and buckets of blood and brilliant body horror is the same person who brought us the Lord of the Rings saga. Come back to us Peter Jackson, the horror community misses you.

Dawn of the Dead (2004)
Back in 2005, in the time of green tinted remakes and the beginning of a played out zombie craze, I remember being introduced to the remake of George A Romero’s Dawn of the Dead. It was a day in 7th grade when a friend of mine summoned me over to join a small crowd gathered around his laptop. On it, he was playing the zombie birth scene from the Zack Snyder helmed remake, a film about a group of survivors holed up in a shopping mall during a zombie outbreak. As this group of 12 year olds cringed our way through the scene, I become obsessed with seeing the rest of the film and talked my friend into lending me the DVD that night. Although at this point in my life I had already started renting Pet Sematary at least once a month and was not unfamiliar with scary children in horror films, this was the first time I had seen anything where an infant was involved. Babies felt like some kind of ultimate taboo and this film showed the whole zombified ordeal. Apparently, the child was originally supposed to kill the mother but the scene was later changed. I choose to believe this was intended to be a tribute to Romero’s Night of the Living Dead in which a young girl becomes a zombie and kills her mother with a trowel. Even without the matricide, the baby is actually pretty creepy and the birth scene will make even the most hardened horror nerds cringe even slightly. To this day I will defend this film to anyone who will listen and I think it is still one of the strongest in terms of remakes. If only Zack Snyder would also return to horror films.

The Howling III: The Marsupials (1987)
This one is about as wacky as it sounds. This Ozploitation contribution to this popular werewolf franchise offers up 80’s camp with a good soundtrack. It is a meandering mess of a film that is essentially plot-less, with no discernable connection to the original film besides the were-creature aspect. In this film’s mythology, Australian werewolves have evolved into marsupials that birth their young partially developed and carry them in a pouch for the rest of their incubation. When one of these young werewolves runs away from her pack in the outback, she travels to the city where she is quickly scouted and offered a role in a horror film being shot nearby. She also become romantically involved with an American man, with whom she has sex with during the wrap party of the film, resulting in her pregnancy. The subsequent birth scene firmly earns this film a spot on this list. It is lengthy and disturbing yet ridiculous enough to feel at home in the absurdity of the rest of the movie. The design of the were-baby in its various stages was actually pretty striking and is easily the film’s trademark. Aside from the baby, the film was not otherwise without merit. While the horror film story arc seemed excessively meta, there were a few moments that reminded you the film wasn’t taking itself too seriously. At one point the characters go to see a werewolf film in theaters called It Came From Uranus and the final 30 seconds of the film are pure satirical gold. Although the worthwhile moments of this film add up to less than 10 minutes of the run time, they are good enough to subject yourself to the rest of it, if only to witness the birth of a marsupial were-baby.

It’s Alive (1974)
If you are even loosely familiar with director Larry Cohen’s work, you will be able to recognize his brush strokes on this one. Of all of his over the top B-movies-turned-cult-classics, It’s Alive is easily one of his most well known films. It does stand on it’s own among his oeuvre due to the film’s more frightening components. Although very much a product of its time, it’s easy to see how this film could have been quite scary to people upon it’s release. It definitely takes itself more seriously than some of his other films, such as his 1985 classic, The Stuff, a film that still had some surprisingly dark moments despite it’s wacky sensibilities. It’s Alive, follows a typical suburban family as Lenore, a pregnant woman goes into the hospital to give birth. Instead of delivering a healthy human baby however, Lenore delivers a monstrosity that attacks and kills anyone that frightens it. Her husband Frank immediately decides to hunt down and eradicate the child. The baby-monster was created by legendary effects master, Rick Baker and is the stuff of nightmares. Despite the infuriating characters and muddled plot, It’s Alive touches on some very prevalent fears of the 1970’s. The uneasiness surrounding abortion and the effects of unknown chemicals upon the human body were directly confronted in the film despite its B-Movie qualities. Often, it is the films that aren’t taken seriously by the general public that have the courage to confront these issues head on and Larry Cohen seemed to discover this fact early on and made it a staple of his career.

Eraserhead (1977)
In a strange way, Eraserhead is the most serious film on this list. It seems almost ironic describing David Lynch’s feature film debut as serious, but it definitely employs a very different sense of humor than the former titles on this list. One of my favorite things about David Lynch films is how difficult it is to pin them down. They transcend genres and juggle tones with paradoxical elegance. Eraserhead is a mind-bending exploration into the most primal of human emotions. No matter how many times I see this film, I get something new out of it. Although I can only speculate about Lynch’s original intentions, I recognize everything from the anxiety of parenthood, to the relativity of morality. It examines the darkness in human nature and how we interact with others and navigate relationships in an often-isolating reality. Eraserhead takes place in an industrial location, starring Jack Nance as Henry, an agreeable factory worker who soon finds his life turned upside down when he learns that the young woman he has been seeing has just had a baby and he is the father. He is especially surprised by this news since the couple had only recently slept together and the baby may not be exactly human. He does the honorable thing and marries the young woman; the pair move in together in his small studio apartment with their child. The baby, if you can even call it that, is a grotesque creature who does not stop crying. Both parents begin to dissolve into their own overwhelmed state of existence. The film is startlingly relatable despite its absurdity and holds many interpretations; Lynch himself has notoriously never divulged his own perception, wanting the audience to draw their own conclusions. He has also kept the special effect secrets behind the infant a secret as well. One rumor claims it was an embalmed calf. Unfortunately (or actually very fortunately) David Lynch is a steadfast man of mystery and I have a feeling that he will take the secrets of Eraserhead to his grave.

While most of these films used babies as nothing more than silly plot devices and shock value, they all recognize the taboo babies hold in modern society. They are the embodiment of innocence and purity and therefore putting them in peril has a tendency to biologically set off some alarm bells. But what about when the danger is coming from the child itself? Some of these films used the intricacies of that fear humorously, while some went for sheer shock value and others were using it to make a more meaningful statement. No subject is safe in the horror genre and everything is open for experimentation and examination. So if you’re feeling festive, check out one of these titles, or let us know about some of your springtime favorites!