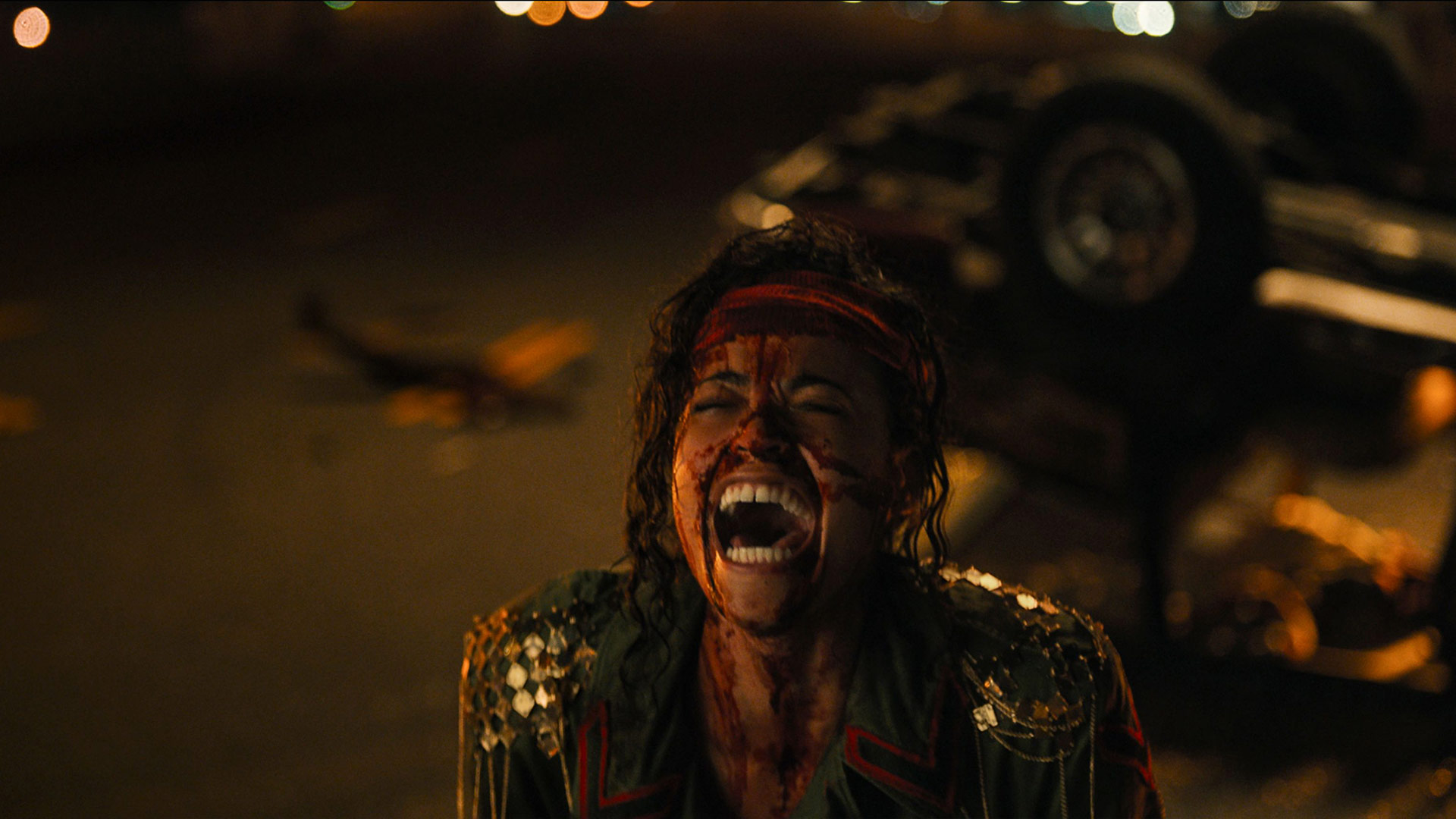 LOS ANGELES, CA (September 15, 2022) - Screamfest® Horror Film Festival, the largest and longest-running horror film festival in the United States, today announced their first-wave lineup of competitive features and shorts for its 22nd edition. Running October 11th through 20th at the TCL Chinese Theater, Screamfest® welcomes audiences back to the big screen for a collective experience they won’t soon forget. Tickets will be on sale soon and can be purchased via the festival website: https://screamfestla.com/

Run Sweetheart Run from Prime Video and Blumhouse will close Screamfest® LA on October 20th. After what begins as dinner with a client, a single mom (Ella Balinska) finds herself hunted by a monstrous and seemingly unstoppable assailant (Pilou Asbæk). Co-written and directed by Shana Feste (Dirty Diana, Boundaries), the film is a must-see watch for the Halloween season and helmed by an extraordinary team of women both in front and behind the camera. A Q&A will follow the screening featuring the cast and crew.

Considered the "Sundance of Horror," Screamfest® is proud to showcase new work from independent filmmakers from across the globe. Highlights from this year’s shorts program include Legs starring Laura Carmichael (Downton Abbey), plus student film Crimson Ties by Francesca Scorcese, daughter of Martin Scorcese. Additional shorts to look out for include Old Time Radio with voiceover by Paul Giamatti, plus The Rotting of Casey Culpepper directed by Daniel Slottje, which was accepted into this year’s Sundance Institute Producers Lab.

It wouldn’t be a proper Halloween without everyone’s favorite killer doll: making its West Coast Premiere is the documentary Living with Chucky (written and directed by Kyra Gardner, who grew up alongside the Child’s Play franchise). This doc seeks out other families surrounding the film series as they recount their experiences working on the ongoing franchise and what it means to be a part of the "Chucky" family. Interviews include Brad Dourif, Jennifer Tilly, Fiona Dourif, Don Mancini, John Waters and Marlon Wayans.

Making their North American debuts are The Revelation from the Netherlands, written and directed by   Chris W. Mitchel about a COVID-19 conspiracy theorist awaiting the apocalypse after moving back home, and The Domestic from South Africa, written and directed by Brad Katzen. Premiering for the first time in LA is Employee of the Month from Belgium, a workplace horror concerning gender pay parity directed by Véronique Jadin. Also receiving its LA Premiere is Swallowed starring Jena Malone, a queer horror nightmare written and directed by Carter Smith about two childhood friends surviving a horrific night in the woods.

West Coast Premieres at the festival include the UK film The Loneliest Boy In The World directed by Martin Owen described as a modern fairytale but with zombies, starring Hero Fiennes Tiffin, Ashley Benson and Evan Ross, as well as Everyone Will Burn from Spain directed by David Hebrero, about a grieving mother visiting a strange little girl who might be connected to a local legend about stopping an impending apocalypse. Additional films in this category include the joint US/Canada production, Do Not Disturb, about a peyote-fueled honeymoon turned cannibalistic, written and directed by John Ainslie, plus the abandoned camp monster comedy Shaky Shivers directed by Sung Kang, and Follow Her directed by Sylvia Caminer, a female-led psycho-sexual thriller secretly filming her creepy online interactions.

We are excited to return to the TCL Chinese Theaters since the theatrical experience is unlike anything else," says festival founder Rachel Belofsky. "We look forward to seeing the LA horror community in person this year and can't wait to see these premieres on the big screen where they belong.

Formed in August 2001 by film producer Rachel Belofsky, Screamfest Horror Film Festival is a female-run 501(c)(3) non-profit organization that gives filmmakers and screenwriters in the horror and science fiction genres a venue to have their work showcased in the film industry.

The year is 1986. Chernobyl has the worst nuclear disaster in history. Mike Tyson becomes the youngest ever heavyweight champion. Hands Across America inspires an awful song, and in Michigan, six knuckleheads from Detroit travel north to partake in the annual tradition of deer hunting. But upon arrival, something horrific has been awakened... In an ironic twist of fate, the hunters have become the hunted.

Written and Directed by John Ainslie

Do Not Disturb follows Chloe and Jack’s honeymoon in Miami where a peyote trip to strengthen their marriage becomes a narcotic nightmare. As they confront their troubled relationship, they discover that this strand of peyote awakens a desire to consume human flesh. Their suite becomes an insatiable den of love, lust and carnal desire as Chloe comes to the realization that the only way to escape this toxic marriage is to literally consume Jack.

Inès is the mainstay of EcocleanPro, a small wholesale company selling household products. She gives herself body and soul to her boss PATRICK, in the love of a job well done. Although PATRICK is proud of his 1992 Manager of the Year award, the laziness of his employees JEAN-PAUL and JEAN-PIERRE play shoulder to shoulder with the boastfulness of NICO, the tiresome salesman. Under the blasé gaze of the new trainee MELODY, the marketing phrases of the Benelux manager ANNA NILSSON open up a new mental space for Inès: she is the only one who never gets a raise, even though she works harder than the others. Is it because she is the only woman in this boys' club? Ines takes her courage in both hands and for the first time insists on being augmented, but Patrick throws her out in two sentences. Ines gets screwed again; her frustration turns to anger. Ingesting Xanax and Viagra won't help. Ines wants her raise and all of EcoClean is going to pay cash for these years of exploitation. Mélody's internship will finally prove to be very instructive...

In a small village in Leon, Spain, María José (30 COINS and SEXY KILLER’s Macarena Gomez) prepares to end her life after failing to get over the death of her son years before. Everything changes when she receives a visit from Lucía, a strange little girl who might be connected to a local legend about stopping an impending apocalypse. With the enigmatic girl by her side, María José faces the corrupt community, triggering strange events and a series of horrific deaths among the local population.

Mattie and her three besties--Eddie, Jess, and Rae--head into the woods for a weekend to plan Mattie's upcoming wedding and bachelorette party. Eddie, Mattie’s roommate and an unrelenting practical joker, leads them to believe they will be setting up camp near Mattie’s hunky fiancé, Jagger, and his friends. They soon realize the tent they’ve snuggled up next to belongs to a mysterious recluse named Mr. Rogers, rather than Jagger, and this is definitely his neighborhood! With zero cell reception and only a literal pot to piss in, their weekend camping trip is beginning to look like a bad idea. But it only gets worse when people start to die and a terrible secret is revealed. All these girls wanted was a killer pre-bachelorette party… and that’s exactly what they got.

A filmmaker who grew up alongside Chucky the killer doll seeks out the other families surrounding the Child's Play films as they recount their experiences working on the ongoing franchise and what it means to be a part of the "Chucky" family.

A modern fairytale, but with zombies. When Oliver is tasked with making new friends, he decides that digging a few up (literally) might be his best bet—as long as he and his newly deceased bffs can avoid getting caught.

At the start of the corona pandemic unemployed Jacob moves in with his elderly mother and falls under the spell of an internet conspiracy theorist. As his sister Magda looks on helplessly, Jacob becomes convinced that COVID-19 the beginning of the Apocalypse. A great sacrifice has to be made.

Written by Shana Feste, Keith Josef Adkins, Kellee Terrell
Produced by Shana Feste, Effie T. Brown, Jason Blum, Brian Kavanaugh-Jones
Cast: Ella Balinska, Shohreh Aghdashloo, Pilou Asbæk, Clark Gregg, Aml Ameen, Dayo Okeniyi and Betsy Brandt
Initially apprehensive when her boss insists she meet with one of his most important clients, single mom Cherie (Ella Balinska) is relieved and excited when she meets charismatic Ethan (Pilou Asbæk). The influential businessman defies expectations and sweeps Cherie off her feet. But at the end of the night, when the two are alone together, he reveals his true, violent nature. Battered and terrified, she flees for her life, beginning a relentless game of cat-and-mouse with a blood-thirsty assailant hell-bent on her utter destruction. In this edge-of-your-seat dark thriller, Cherie finds herself in the crosshairs of a conspiracy stranger and more evil than she could have ever imagined.

Kick-ass vampire slayer, Elliot Jones (Thomas Jane), made it his life’s mission to take revenge on the bloodsuckers who murdered his teenage daughter. After years of tracking them, he has finally reached their secret and hidden base. But to get to them he will need to use a motley crew of social media superstars. Enter ‘The Stream Team’: party-girl Jules (Abigail Breslin), gen-z pro-gamer Flynn (Kara Hayward) and their team of trend-makers and breakers! With a hundred million-plus combined followers, they have attracted the attention of reclusive billionaire Beverly Rektor (Malin Akerman), who invites them to party at her multimillion-dollar vacation compound. They soon discover these rich people are none other than the ancient vampires that Elliot Jones is chasing. When the team is being held captive in a house of horrors to serve the vampires plan to take over the world, Elliott is their only hope of survival. As he links up with Flynn, a slayer in her own right, will he take down the vampire hoard and save The Stream Team?

Written and Directed by Carter Smith

After a drug run goes bad - two childhood friends must survive a horrific night in a backwoods hell of drugs, bugs, and obscene intimacy in this queer horror nightmare.

Formed in August 2001 by film producer Rachel Belofsky, Screamfest Horror Film Festival is a female-run 501(c)(3) non-profit organization that gives filmmakers and screenwriters in the horror and science fiction genres a venue to have their work showcased in the film industry. Among the numerous films that have been discovered and/or premiered at the festival include “Tigers Are Not Afraid.”, “The Wretched”, “We Summons the Darkness”, “Pledge”, “The Master Cleanse’, “Tragedy Girls”, “American Mary”, Paranormal Activity,” “30 Days of Night,” “Trick ‘r Treat” and “The Human Centipede.”  Screamfest hosts monthly screenings year-round such films include “Mom and Dad” starring Nicolas Cage and Selma Blair and many retrospective screenings.

ABOUT 2022SCREAMFEST PARTNERS Screamfest is sponsored by Birns & Sawyer, ELMA, HorrorPack, Simple DCP, Screenplay.com and InkTip. Screamfest is supported, in part, by the Los Angeles County Board of Supervisors through the Department of Arts and Culture. Screamfest is made possible in part by a grant from the City of Los Angeles, Department of Cultural Affairs. This activity is supported in part by the California Arts Council, a state agency. Learn more at www.arts.ca.gov.