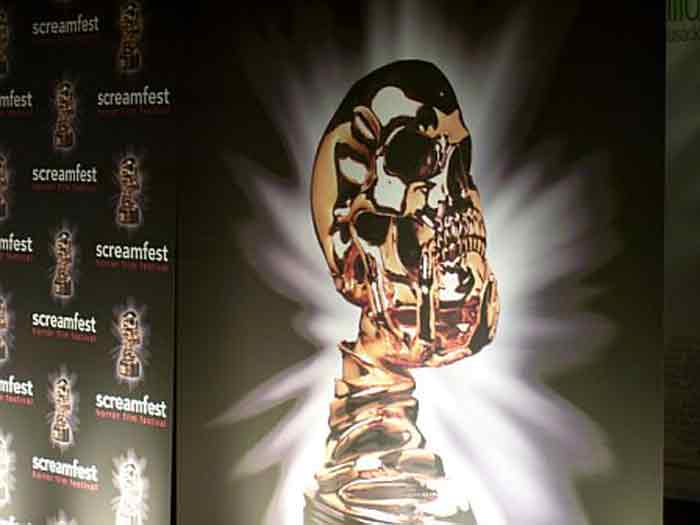 Screamfest Announces Next Wave of Films

Next Wave Screening Highlights at Screamfest 2013

Chimeres (Switzerland) – Directed by Olivier Beguin - While taking a holiday in Romania with his girlfriend Livia, Alexandre is hit by a car. He is hospitalized and has to undergo a blood transfusion. On his return he seems to suffer from a strange disease ...
US Premiere

The Dead 2, India (UK) –Directed by Howard J Ford & Jon Ford - The eagerly anticipated follow-up to the Ford Brothers’ African set ‘The Dead’, ‘The Dead, India’ move us to the hustle and bustle of India as the outbreak of the walking dead take hold. An American engineer teams up with a surviving orphan street kid to trek 300 miles across stunning but deadly rural Indian landscapes to the now infested slums of Mumbai to try and save his pregnant girlfriend. The first ever international zombie movie shot in Incredible India, 'The Dead 2, puts the Ford Brother's unique vision on a far bigger canvas, with breath taking scope, thrilling action and emotional resonance...
– US Premiere

Delivery (US) – Directed by Brian Netto - In this unnerving chiller, Kyle and Rachel Massy are a young couple who have agreed to document their first pregnancy for a reality show. During the production, a series of unexplained phenomena start plaguing the couple, eventually derailing the production of the show. Rachel, growing increasingly paranoid, starts to believe that there might be something seriously wrong with their unborn bundle of joy.

The Demon’s Rook (US) –Directed by James Sizemore A young boy named Roscoe is taken to a world where demons dwell. Raised into manhood by an elder demon, he is taught to master the dark arts. During his training, he accidentally unleashes an ancient race of evil demons. They discover our world and release a nightmarish foray of monsters upon it. Paying homage to its colorful roots and packed full of practical effects, The Demon's Rook is sure to please. – Produced by James Sizemore, Tim Reis, Ashleigh Jo Sizemore & Colin Geddes
- LA Premiere

Frost (Iceland) – Directed by Reynir Lyngdal and from the team of Reykjavik Whale Watching Massacre - A young couple, physiologist Agla and filmmaker Gunnar wake up at a glacier drilling camp only to find the camp mysteriously abandoned and their co-workers gone. When searching for the lost team they realize they’re up against an unknown deadly force.
- US Premiere

The Gauntlet (US)–Directed by Matt Eskandari starring Bai Ling- In a sunken castle underneath the earth, five strangers wake. They have no food. No memory. No water. And no way out. They don't know it yet, but in Hell only their sins can save them. They must organize and band together for the sinister adventure that awaits...
- US Premiere

Goldberg & Eisenberg (Israel) –Directed by Oren Carmi - Goldberg is a mediocre computer programmer. Eisenberg is an emotionally disturbed thug. Unfortunately the two cross paths. "Goldberg & Eisenberg" is the first Israeli urban psychological thriller, and the first dark genre film ever to be approved for production by the Israel film fund. Inspired by Coen bros, Polanski, Park Chan-Wuk. Currently in preliminary talks to be remade as a mini series for a major American cable channel.
- LA Premiere

Para Elisa (Spain) – Directed by Juanra Fernandez - A student enters a terrifying world of obsession and misery when she answers a job advertisement requesting a nanny. Held prisoner in a house full of antique toys, she must overcome her deranged captors or become a living doll.
-US Premiere

Savaged (US) – Directed by Michael S. Ojeda - While travelling across country, Zoe, a lovely deaf mute woman, stumbles on a horrific crime – a gang of rednecks slaughtering two Native American boys. Zoe’s brave attempt to save one of the boys seals her fate. She is captured, raped and left for dead. When an Indian shaman finds her clinging to life in a shallow grave he attempts to save her – but something goes horribly wrong. The spirit of an ancient Apache warrior takes host of Zoe’s dead body. So now she walks amongst the living, hell-bent on getting revenge. One by one she slaughters the men who brutalized her, while the clock ticks away on her quickly decomposing body.
-US Premiere

The Seasoning House – (UK) Directed by Paul Hyett - The Seasoning House - where young girls are prostituted to the military. Angel (Rosie Day), an orphaned deaf mute, is enslaved to care for them. She moves between the walls and crawlspaces, planning her escape. Planning her ingenious and brutal revenge.
-LA Premiere

Viscera – (US) Directed by Pete DiFolco & Craig DiFolco - In the aftermath of a flesh-eating plague that has wiped out most of humanity, a surviving man and woman face unimaginable horrors when he suddenly becomes infected. Confined to the basement of an abandoned farmhouse, she tends to him as his body rapidly deteriorates over the next four days. But they soon find themselves up against more than just the disease. A crazed infected woman begins to stalk the farmhouse. A suspicious stranger arrives promising the key to survival. And the only possible cure is an injected drug that slowly drives you insane.
– World Premiere