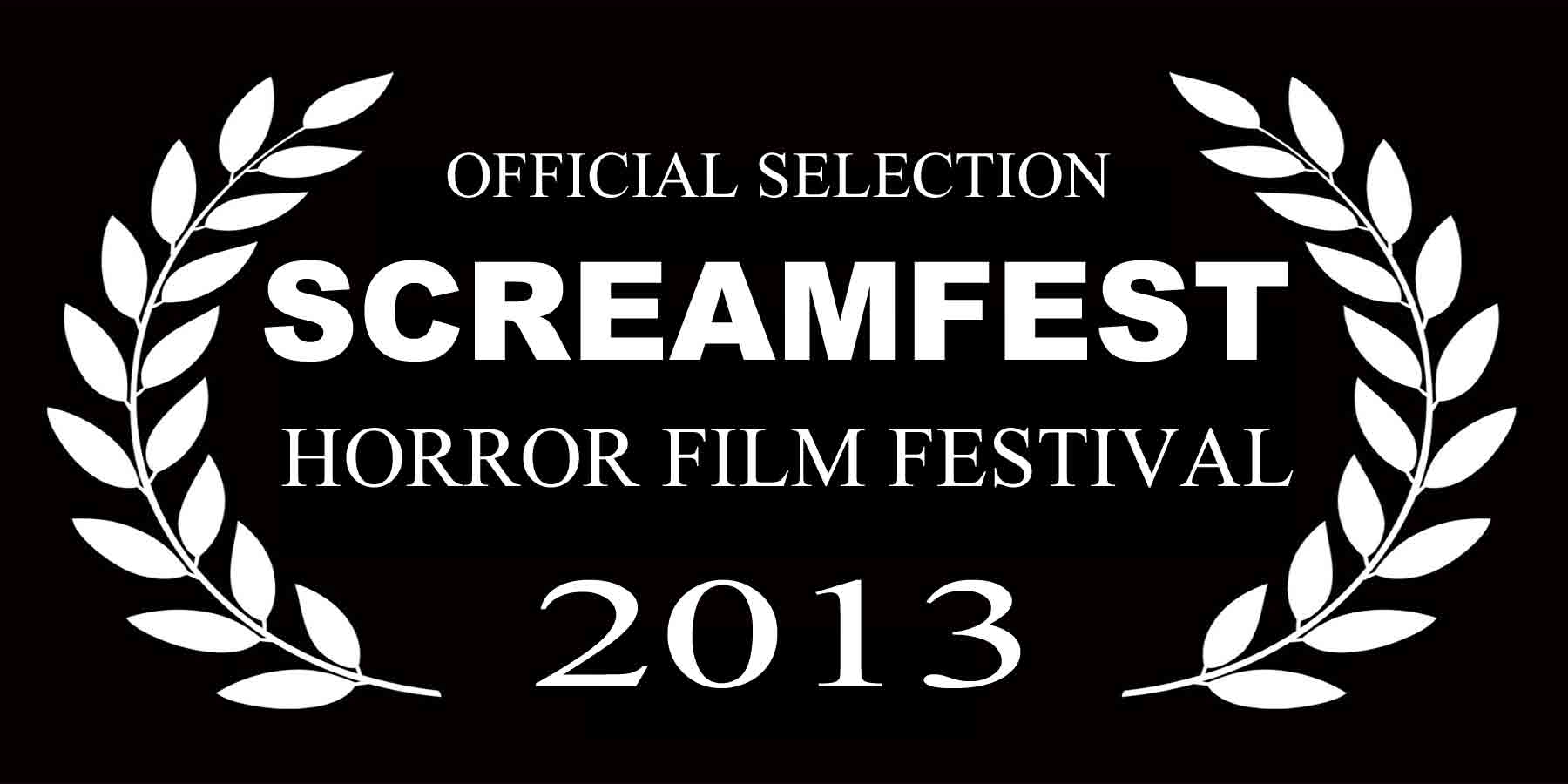 Hollywood, CA., September 13, 2013 – Screamfest®, the preeminent horror festival in the country, and what the LA Weekly calls “the best place to get a jump on tomorrow’s cult hits” kicks off its 13th annual event in Los Angeles on October 8 through October 17 at the Laemmle NoHo 7 (5240 Lankershim Blvd, North Hollywood, CA 91601).

This year’s shorts will also be eligible for the additional Screamfest Launchpad Award which will be awarded to the director who shows the most promise for the next step up into feature films.

Aftermath (US) – Directed by Jeremy Robbins - Jem is still a kid, cracking jokes and doing impressions and wishing he could watch TV. In a frozen, lawless, and kill-or-be-killed world, it is up to Cody, the older brother, to be the ultimate protector. He stays up each night, rifle in hand, making sure he and Jem survive to see the next morning. In the wake of a new, predatory ice age, two brothers wrestle with their responsibilities and with each other, all the while searching for a place to call home.

The Banishing (US) –Directed by Erlingur Thoroddsen - Sixteen year old Kara must decide if she believes her younger sister, Jessa, who claims a supernatural presence is forcing her to do evil deeds

The Barista (US) – Directed by Rebekah McKendry - Through extensive research a scientist has discovered that an apparent slacker coffee barista has a deep, dark secret.

Black Sugar (US) – Directed by Hank Friedmann - Suburban reality unravels when a group of teens experiment with a new drug that takes its users to a terrifying new world. Charlie (Aaron Refvem, Sons of Anarchy) dreams of escaping his boring life, and in the darkest reaches of the internet he’s found his answer: Black Sugar. Promising a trip they’ll never forget, Charlie and his rebellious friends swallow the candy-colored hallucinogen, much to the dismay of Charlie’s tag-along neighbor, Adam (Jake Kellar). When Black Sugar takes hold, the teens find themselves thrust into a living nightmare, infested with terrifying creatures that serve a horrific purpose. With Adam stuck in the real world, it becomes a race against time to save his friend from Black Sugar. An accomplished director of music videos, and editor for the hit show Comedy Bang! Bang!, Hank Friedmann’s personal take on the horror genre combines an indie coming-of-age story with a mind-bending supernatural vision. Featuring a talented cast of young teens and monstrous practical effects, Friedmann paints a unique picture of the suburban life before eviscerating it with an overdose of terror.

The Body (UK) –.Directed by Paul Davis -. THE BODY tells the gear and body bag get mistaken for a costume, and he is dragged to a Halloween party, with hilarious and horrifying consequences.

Butterflies (Australia) – Directed by Isabel Peppard - A young artist sits on the sidewalk, struggling to make a living. She makes drawings for the passersby. A businessman recognises her talents and offers her a paying job. The prospect seems inviting but the reality threatens to kill her imagination….

Capstone’s Oak – (US) -Directed by Will Phelps - A short film following Mike Capstone as he tries to resist the temptations of greed after stumbling across a dark family secret... an oak tree that grows money when the dead are buried at its roots.

Cough – (Australia) - Directed by Jason Kempnich - Civil liberties are yesterday! Food shortages during a global pandemic force recently widowed George to stray increasingly far from home to survive. A simple purchase of rations turns dangerous when George stumbles upon a Shopkeeper’s secret, placing all of them in mortal jeopardy.

Dembanger – (US) - Directed by John Berardo - After receiving and accepting a friend request, Wes Andrews thinks he's going to have a quiet night at home alone with his parents gone. Right when his girlfriend leaves, he realizes she left her cell phone. Hours later, Wes begins to receive calls on both hers and his cell phones from an unfamiliar voice. He then receives Facebook messages and posts from this same person. Wes then learns that he may have put too much of his personal information up on his Facebook page. Either someone is playing a cruel joke or Wes is in for the most terrifying night of his life.

Desolate Road –(US) - Directed by Marwan Abderrazzaq - Desolate Road is a horror short about a couple on their way to start a new life and run into car trouble on a desolate road somewhere in Texas.

Drudge - (US) – Directed by Kheireddine El-Helou - What was supposed to be a romantic night in for a young couple, quickly turns into a terrifying encounter with Drudge… A new face of horror is born.

Forever – (US ) – Directed by Niav Conty - A love story goes terribly awry when she wants out and he feels compelled to keep her.

Frost – (Canada) – Jeremy Ball - When a season of scarcity threatens her family, a young arctic hunter embarks on a perilous search for food. Crossing the sacred boundary of her people's ancestral hunting grounds, she discovers a strange world beyond her ability to comprehend and a dangerous predator that may be beyond her ability to survive.

The Girl – (Ireland) – Directed by John Hayes - After another devastating miscarriage, Sophie, an emotionally fragile English woman leaves London and moves to Ireland with her husband to start a new life. Their remedy is a 'project' house on the desolate west coast. But when Conor is called away Sophie finds herself alone and visited by a young girl whose language she doesn't understand. Yet the bond that develops between them sees Sophie's long dormant maternal instincts rising to the surface. Sophie may finally have her little girl. But is she a gift or a curse?

Good Night – (Slovakia) – Directed by Peter Czikrai - Outlying village. House rings with essence of stillness. A door bell breaks atmosphere of Christmas Eve. Enigmatic couple at the door seeks for accommodation. Renting out unoccupied room - for humble landlords a chance of freeing from indigence. More mysterious than couple themselves looks the bag that makes landlords everything but easy. Nothing remains, just to treat them as guests and say good night. However, the night turns into the longer one than would be expected.

Hide and Seek – (Japan) Directed by Kayoko Asakura - A girl visits a house to take a Koto lesson. (Koto is a traditional Japanese stringed musical instrument.) She sees a teacher and her son, they play 'HIDE and SEEK'. And Koto lesson starts, a teacher's behavior becomes odd.

La Piedad – (Mexico) – Directed by Mariela Martínez S.- Eight year old Federico lives with his father in a meager apartment in Mexico City. His father devotes his days to sleep and work, keeping young Federico away from a carefully-guarded, locked door, behind which lies his mother..

Leave Us Alone – (Canada) – Directed by Nicholas Treeshin - Sam, a city dwelling single mother inherits a profitable piece of farm land from a grandfather she never knew. On the grandfather's deathbed, he tells Sam about a ship that crash landed on the farm before she was born, and that a deal was made to protect the ship's cargo. In return for protection; a notoriously ever producing farm regardless of drought or flood was the result. Not heeding her grandfather's advice, Sam's world is literally smashed when her grandfather's wild story begins to ring true. Covering up the disappearance of three missing geologists, Sam is prepared to do almost anything to protect her son as well as the farm's dark secret.

Luna – (US) Directed by – Antonio Perez - In a remote, desolate town, a cold-blooded serial killer invades a family's quiet home. The sole survivor of his latest crime is a young girl, who does everything she can to escape before the mysterious stranger finds her.

Mullet Gut – (Australia) – Directed by Steve Boyle - Two lifelong friends in the twilight years of their life, seek retribution against the schoolyard bully that tortured them as children. Things don’t go to plan as one of them begins to question whether they have the right man. At its heart, MULLET GUT is a mystery that will keep you guessing until its final moments.

The Old Woman In The Woods – (Canada) Directed by Caroline Coutts - A Gothic fairy tale combining live action and stop motion animation to tell the story of two little girls whose desire to be grown up results in horrific consequences. The screenplay, adapted from the classic fairy tale 'The New Mother,' by Lucy Lane Clifford, is set in England in 1882. In the film, Hanna and Mary meet an old woman with an ornate wooden box, inside which exists a magical fairytale land. The girls beg to see inside the box, but are told they are not grown-up enough. But they can prove they are grown-up by not doing what their mother tells them.

Operator – (US) – Directed by Sam Barnett -Bob is an operator working for InfoCorp. When something goes wrong while the corporation installs a new efficiency system, the machine gives birth to a creature. As Bob struggles to work while fending off the creature, he realizes he may be choosing between his life and his job. -

Skypemare – (US) – Directed by John Fitzpatrick -Halloween night. An announcement of an escaped convict plays on the news as Alison chats with her best friend, Jenna over Skype.

Sleepworking – (UK) – Directed by Gavin Williams -In the near future a young woman becomes a sleepworker: her body is programmed to do menial labour while she is asleep. However, she starts to suffer disturbing side effects and embarks upon a dangerous journey to uncover what sleepworkers are really being made to do while unconscious...

The Storm – (US) – Directed by Andre LeBlanc -“They'll keep looking for a way in. They have to eat.” Locked in the security chamber of a remote arctic outpost, Daniel and Jane are the last survivors of a military experiment gone wrong. Beyond the door are the Hunters- genetically enhanced, sensory-deprived humans that know nothing but hunger.

Sulfuric – (US) – Directed by Jeff Brown - Jennifer returns from a trip to find her roommate in their apartment, unconscious. After reviving her, it becomes apparent that something is occurring inside their home. Something awful.

The Summoners – (US) – Directed by Christian Ackerman - Two high school girls invite a new friend to join their secret game of summoning spirits for the thrill of being possessed.

Thirteen – (US) – directed by Dan Jagels - A thirteen year old girl survives a horrific tragedy and must learn to deal with the changes as she becomes a teenager.

Transito – (Spain) – Directed by - Macarena Astorga - Paul is going to an important meeting. Distracted and talking on the phone realizes that it has lost its way. The car's engine stops. From now on, nothing will be the same for him.

Woodland Heights – (US) - Directed by Samuel Gonzalez, Jr. – “There is no terror in the bang, only in the anticipation of it,” Hitchcock. In tradition with drive-in horror movies of the 1950's, Woodland Heights tells the story of a young couples prom night taking a bizarre turn for the worse. Based on the classic urban legend "The Hook."

The Wretched: Prologue – (US) - Directed by Richard Greenwood, Jr. - 395 A.D. Roman Centurion Markus Valerius leads a rag-tag outpost of soldiers in the isolated Germanic Black Forest that has come under attack by a horde of bloodthirsty barbarians inflicted with a horrendous virus that reanimates the dead into ravenous bloodthirsty beings known as the WRETCHED. One last tour for Rome, one last dangerous post to retire...but fate has other plans. Escape is no longer an option... it's Kill or be Killed.