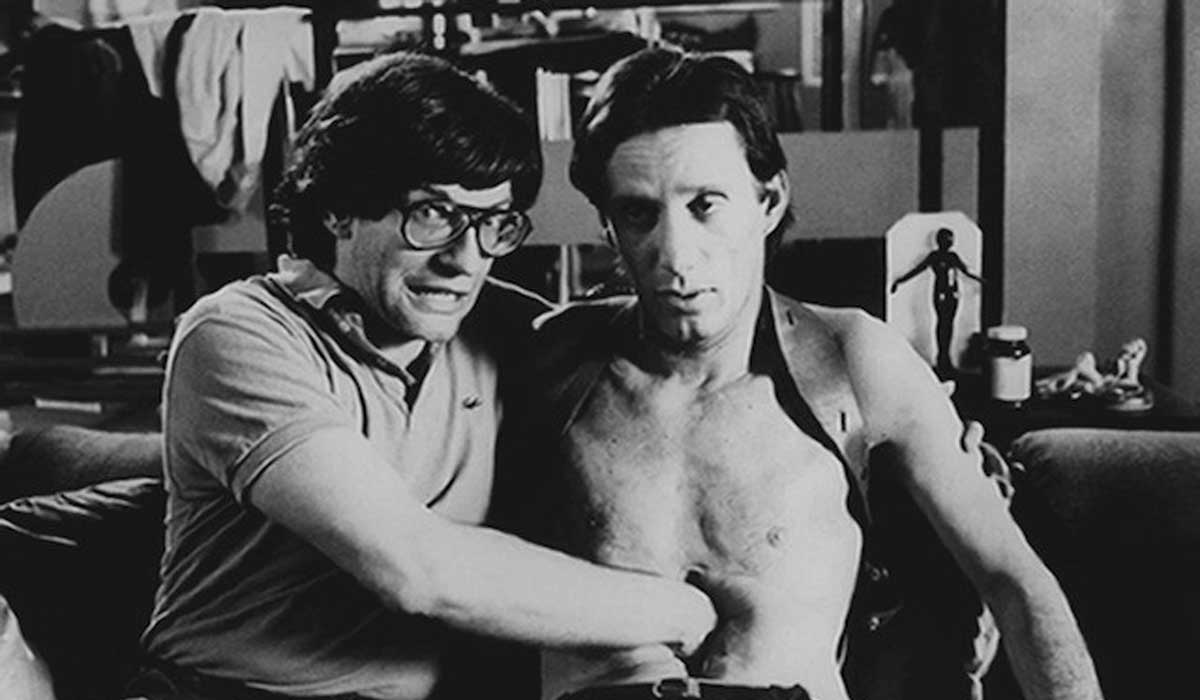 Quintessential Cronenberg: Happy Birthday to the Master of Body Horror

Often considered to be the master of “body horror”, David Cronenberg has spent the last four decades constructing a signature style that is often copied but rarely matched. His visceral visual style and directing talent make for a great filmmaker but Cronenberg’s ability to creatively and critically observe humanity through his films make him as close to a contemporary philosopher as filmmakers really get. Exploration seems to be the goal of his films. He uses filmmaking as a way to present What-If situations as a means to fully understand what makes us tick biologically, technologically, mentally and emotionally. He uses fear, the most primordial of human emotions to uncover these fundamentals of being human. But with so many films in his repertoire, it could be potentially difficult to know where to start. The idea of this list is to serve as a bit of a David Cronenberg starter pack. A lot can be gained by watching his films in the order of release because you can see how his philosophical priorities evolve as he hones his craft. Although I do recommend exploring his filmography as a whole, in the essence of relevancy, I’m going to stick to his more horror specific titles. So in honor of David Cronenberg’s 74th birthday, here are five of the Cronenberg-iest of the Cronenberg films: 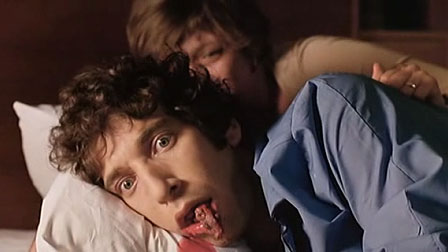 Shivers a.k.a They Came From Within (1975)
With an original script titled Orgy of the Blood Parasites, David Cronenberg laughed in the face of cultural taboo from the very beginning. It was his way to “show the unshowable.” The film takes place in a luxury apartment complex in Montreal, where the tenants privileged lives are turned upside down when a sexually transmitted virus, in the form of a phallic looking worm creature, starts to turning everyone into sex crazed zombies. It is discovered that the apartment’s resident doctor was responsible for creating the creature and it was an experiment gone wrong. Aside from the man-made monster moral of Shivers, it mostly focuses on classism in 1970’s Western culture. Even the bourgeois, high class is still vulnerable to human weaknesses. It suggests that if a large virus were to hit, everyone would be equal in a sense. At the peak of the sexual revolution, Cronenberg presented what ended up being a slightly prophetic scenario that explores the public health risks of the movement. I don’t believe the film was a blanket criticism of the movement itself, it was only a statement about social extremes and about how, as the social pendulum swings in the other direction, a whole new set of problems need to be considered. 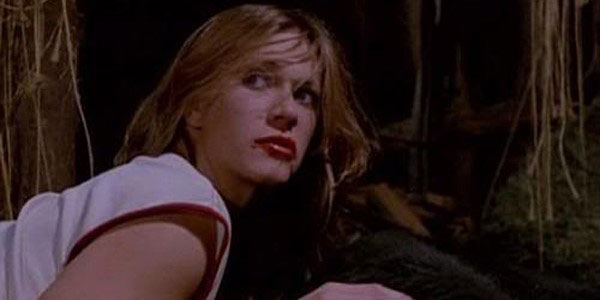 Rabid (1977)
Made only two years after Shivers, Rabid feels as though it could be a sequel to the film. Well known adult actress Marilyn Chambers stars as Rose, a young woman who undergoes experimental surgery after suffering a near fatal motorcycle crash. After waking up from the procedure, Rose finds that she not only thirsts for human blood but has now grown a large stinger that extends from her armpit. To make matters worse, her victims start to become bloodthirsty zombies after she attacks them. This film is when the David Cronenberg checklist begins to arise; a selfishly intentioned scientific procedure results in disaster, check, sexual desire as a human weakness, check. There is even some very obvious phallic symbology. This film sets itself apart from Shivers because it explores Rose as a character. It’s hard to condone her actions throughout the film but she does represent the survival of the fittest theory of nature. She did not ask for what happened to her, but she finds herself the victim of an unfortunate situation, and does what she needs to do to survive. I personally enjoy watching Rabid after Shivers because Cronenberg is already making strides as a filmmaker and I enjoy watching his visionary style take shape. 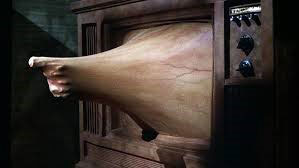 Videodrome (1983)
In Carrie Rickey’s article “Make Mine Cronenberg” she states, “for those unfamiliar with the Cronenberg oeuvre, the simplest description of Videodrome will read like a foreign language. Best to work up to it slowly.” In this, I wholeheartedly agree and again I go back to my earlier point of the benefits of watching his film in a timeline. But although the film is not the best introductory film for his work, it is one of the most cohesive and well executed. It is unlike most genre films because it does not treat death as the ultimate source of fear. Videodrome suggests things could be worse than death, another running theme in his films, best portrayed in his version of The Fly (1986). Videodrome stars James Woods as Max Renn, a cable TV programmer who is constantly searching for the most extreme content for his station. When he is introduced to a pirated broadcast of what seems to be torture, he becomes obsessed with acquiring the show for his channel. His search leads him into the realms of dark fetishism and the blurring of lines between reality and television. Videodrome is an example of a film where all the elements seem to align just perfectly. James Woods delivers an excellent performance as a man whose dark curiosity leads to his own downfall and Deborah Harry sells her role as Renn’s girlfriend Nicki Brand as she struggles with her own dark desires. With the help of the special effects artist Rick Baker and his long term Art Director, Carol Spier, Videodrome really solidifies Cronenberg’s visual style. What makes Videodrome a particularly important addition to this list is how well it has aged. In spite of the obviously outdated VHS technology in the film, it still remains as culturally relevant as ever. 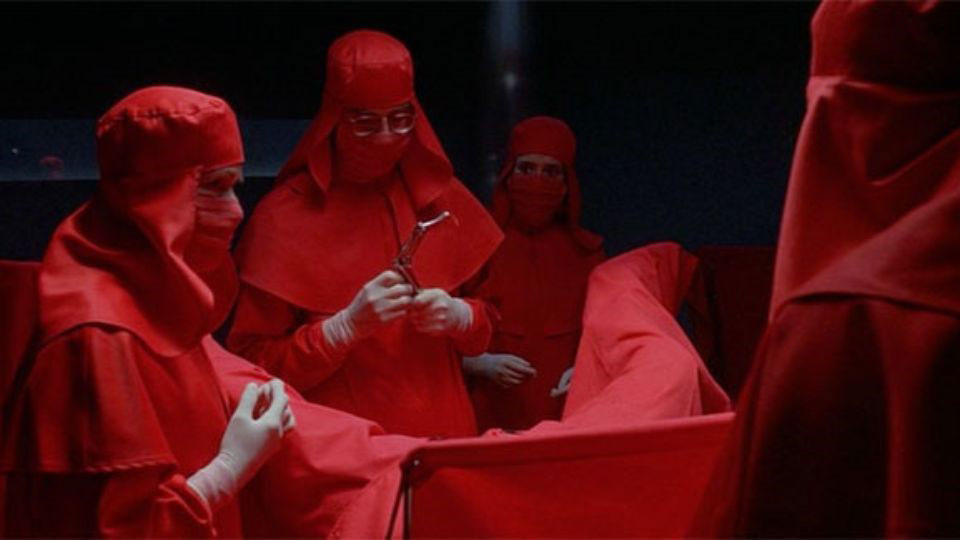 Dead Ringers (1988)
Although not nearly as by-the-numbers horror as some of his classic films, there is something quietly unsettling about this one. The deeply sexual freudian undertones of the film are one of the Cronenberg trademarks, but something about the way it is handled in this film makes it feel deeply perverse. Dead Ringers is the story of two identical twin gynecologists, Beverly and Elliot Mantle, both played by the ardent Jeremy Irons (whose performance alone is enough to justify watching). The successful doctors have manipulated their lives to cater to their own selfish desires. However, when one of them begins to get a bit too close to one of their patients, Claire (Genevieve Bujold, who bears an uncanny resemblance to Ally Sheedy) their relationship begins to fall apart. And as they begin to lose their connection with each other, they start to struggle with their own individual identities. From the first scene, the brothers struggle with connecting to anyone on an emotional level, but they are fascinated with the physical aspects of the human body, especially the female form. Because of this, it is no surprise that they choose to go into gynecology. Dead Ringers is a complex film that can be unpacked layer-by-layer, just through Iron’s two different performances. Fundamentally, it is about symbiosis and about man’s selfish need to tinker with the world around him in the quest for ultimate understanding. The brother’s were doing as doctors what Cronenberg himself does as a filmmaker. They are victims of their own curiosity. The brother’s could only understand the physical parts of the human condition and attempt to use their craft as means to understand everything else. Thankfully, Cronenberg seems to have chosen a healthier outlet for his curiosity than the Mantle twins. 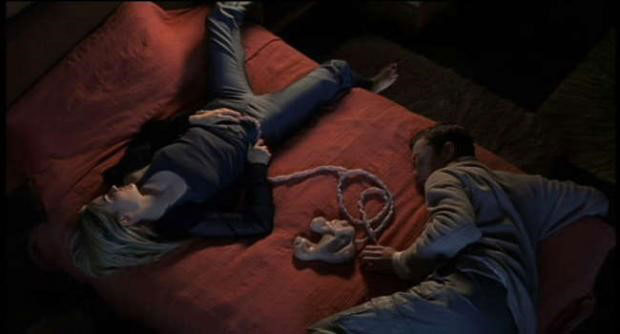 eXistenZ (1999)
After being attacked at a demonstration for her new virtual reality game eXistenZ, game designer Allegra Geller (Jennifer Jason Leigh) must go on the run with begrudging bodyguard Ted (Jude Law) as more attempts are made on her life. When her pod, a futuristic gaming device that is physically implanted in the wearer’s body, is damaged, Allegra convinces Ted to play through her new game to see make sure there are now problems with her creation. As David Cronenberg’s last true “body horror” film, eXistenZ pulls out all the stops. The visceral effects meld together with the dystopian future hinted in Videodrome. It’s almost as if it is a sequel to his earlier film mixed with his version of Total Recall (a film that he was originally offered to direct). This film examines the techno-fear of the Y2K era and mixes it with his own examination of the nature of reality. Just like Videodrome, eXistenZ is surprisingly pertinent to our current society and will probably only become more relevant as virtual reality becomes an actuality.

Even though the same ideas and themes reappear consistently throughout his filmography, it is a testament to Cronenberg’s skill as a director and storyteller that his films did not get too repetitive. He takes popular philosophical topics and uses his characters to analyze and debate them. Not to say his films are without conviction, but it is almost as if he is making a statement by not making a statement, or by covering many viewpoints at once. He said it himself “I don’t have a moral plan. I’m a Canadian.” David Cronenberg is a pure auteur. Instead of using his art as a way to tell the world about who he is, he uses it as a way to understand and explore existence as a whole. He has inspired generations of filmmakers and is one of the most talented genre directors of all time. With that I say: Happy Birthday, David! And I hope you enjoyed this list.

“I think of horror films as art, as films of confrontations. Films that make you confront aspects of your own life that are difficult to face. Just because you're making a horror film doesn't mean you can't make an artful film.”