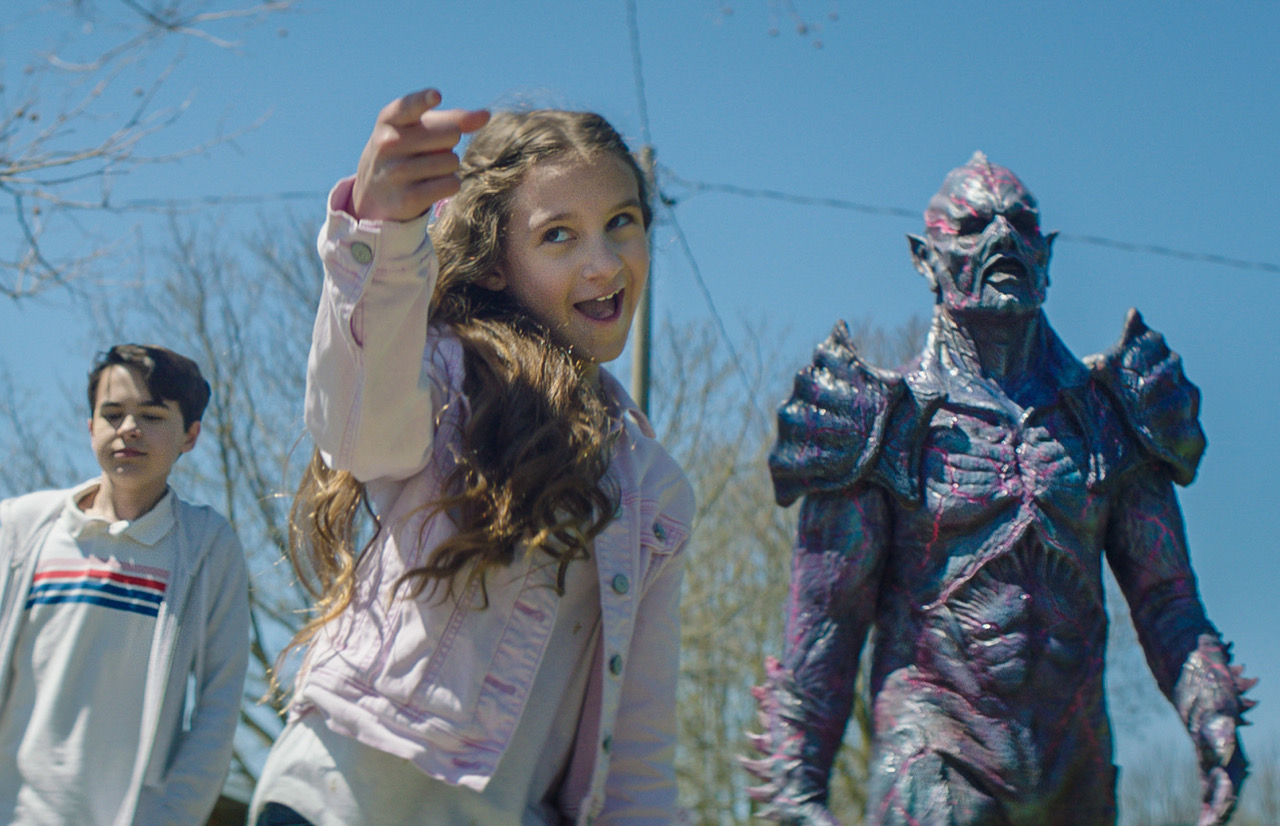 Over the past decade, there has been a welcome shift in the use of CGI when it comes to low budget/independent genre films. As these tools got cheaper and easier to use, there was an unfortunate period where digital beasties were cropping up in productions that didn’t exactly have the resources to let them compete with the likes of ILM, but I’m happy to see that those sorry examples are becoming rarer.

Instead, practical creatures/suits have become in vogue again (while still retaining the use of CGI to enhance them; no one is saying it has to be one or the other), and there isn’t a better recent example I can think of to demonstrate that than Psycho Goreman, This Canadian effort (from most of the Astron-6 team that gave us Manborg and Father’s Day) was made for well under two million dollars but still gives us a dozen full-sized humanoid creatures, plus a few glimpses of the alien worlds from where they came. For a practical FX aficionado like myself, it’s nirvana.

It’s also a pretty fun movie, though I will caveat that sentiment by noting that it will certainly not be for everyone. This is definitely a “love it or hate it” kind of affair, one you have to be in the right mood for or else you’ll find it unbearable. If you’ve seen Manborg, or - perhaps even more apt a comparison - director Steve Kostanski’s “W is for Wish” segment in ABCs of Death 2, I think you’ll get an idea of whether or not this movie will be for you.

Psycho Goreman (PG for short, and yes the allusion to the MPAA rating is intentional) tells the story of a murderous alien warlord who is resurrected on earth thanks to an amulet that two kids find in their backyard. He wants to just kill them and everyone else on the planet, but as long as the kids have the amulet in their possession he has to do what they say. And so they do what any adolescent kid would do with a monster pet: they make him play games with them, fight back against their bullies, and try to make him blend with their real world. But when his arch nemesis, Pandora, also comes to earth seeking to destroy him, the kids find themselves caught in an intergalactic battle to the death. 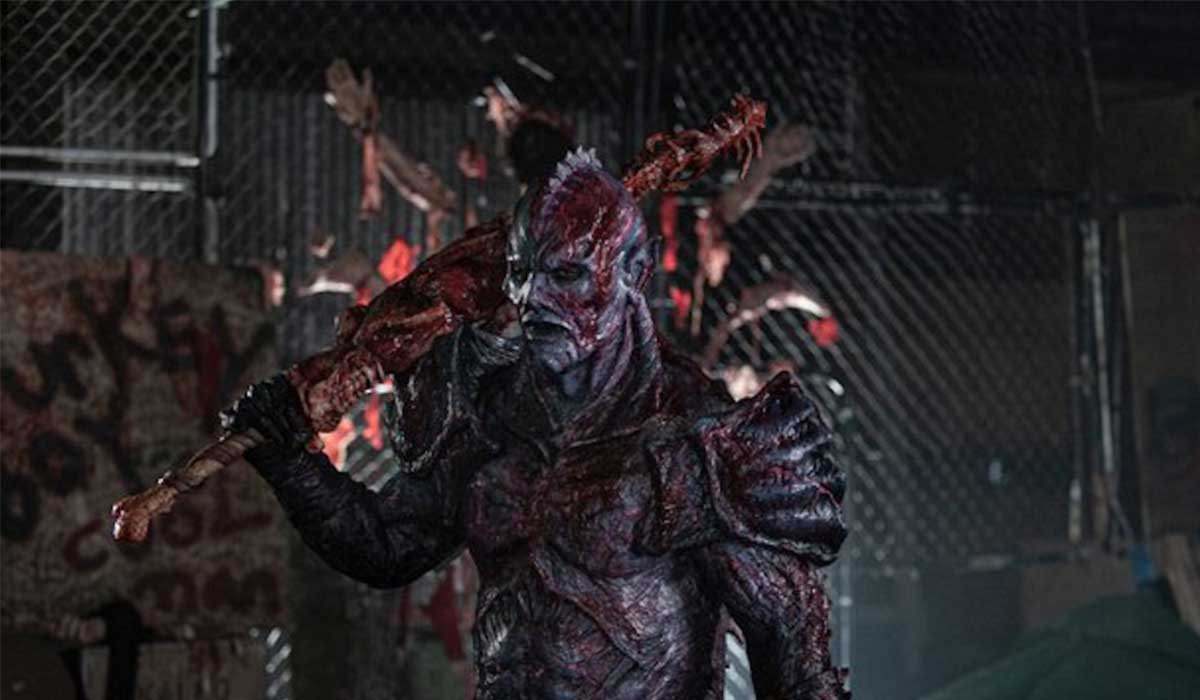 And the beauty of it is that it’s even more ridiculous than it sounds, diving into R rated elements despite its Saturday morning cartoon storyline. As Kostanski admits on his director’s commentary, he’s a “big fan of random nonsense that doesn’t service the plot”, something that he demonstrates time and time again. At one point PG turns the kids’ friend Alastair into a deformed blob, an event few others (including the child’s parents) seem to be particularly bothered by. PG (dressed as Alan Grant from Jurassic Park for no discernible reason) also uses his powers to turn a town cop into a melting drone who continually tries to kill itself, a sight gag that never stops being as funny as it is completely pointless.

But even if you mute the sound and fast forward through the scenes with only human characters, I think anyone would have to appreciate the amount of craftsmanship that’s on display for such a low budget film. PG’s costume (apparently not comfortable or easy on the actor, who is in nearly every scene) alone would be more impressive than what we get out of most films on this budget, but all of his enemies have a similar “look” and are played by actors who similarly stuffed themselves into suits to play ridiculous aliens with names like Cassius 3000, Darkscream, and Witchmaster.

The aesthetic is very much in line with things like The Guyver and the best incarnations of Mighty Morphin Power Rangers; Kostanski was a child of the 90s and has dove in deep to pay homage to that era of (mostly) pre-CGI man in suit spectaculars. And there’s an impressive amount of variety among the creatures (most of whom are watching the events on Earth in scenes Kostanski admits is a parody of the interminable council scenes in the Star Wars prequels), as opposed to “a race of (samey looking things)” that would let him cheat with CGI duplication. However you might feel about the movie, there is no denying how much work the team put into building as much of this world, and doing it without relying entirely on pixels.

That old-school aesthetic is carried over into the Blu-ray, which is among the most packed I have seen in years for a modern film, harkening back to the glory days of the late 90s, when DVDs were new and the studios were jamming them with as much content as they could think of. In addition to Kostanski’s commentary, there’s at least an hour of interviews, storyboards, pre-viz footage, behind the scenes footage, and other elements that will give you an even better look at the crew’s abilities to stretch every dollar of their budget without having to sacrifice any major ideas. I also quite enjoyed one creature performer giving an interview in character, comparing his murderous alien leader to a certain divisive political figure here on Earth and how neither of them think much of human beings.

Somewhere along the way Kostanski mentioned that the concept of the film is “What if a kid wanted He-Man as a friend but got Skeletor instead”, and he truly succeeded at bringing that insane concept to life. Again, it’s not going to be loved by everyone who sees it, but those who find themselves on its peculiar wavelength will have a blast; I’ve seen it three times now and there are still parts that make me burst out laughing (“You’re…. welcome…”). But more importantly, even when a gag isn’t landing, I never stop being impressed that the film gives you more visual flair and lo-fi ingenuity than you’re likely to find in a half dozen movies that had far more resources at their disposal.