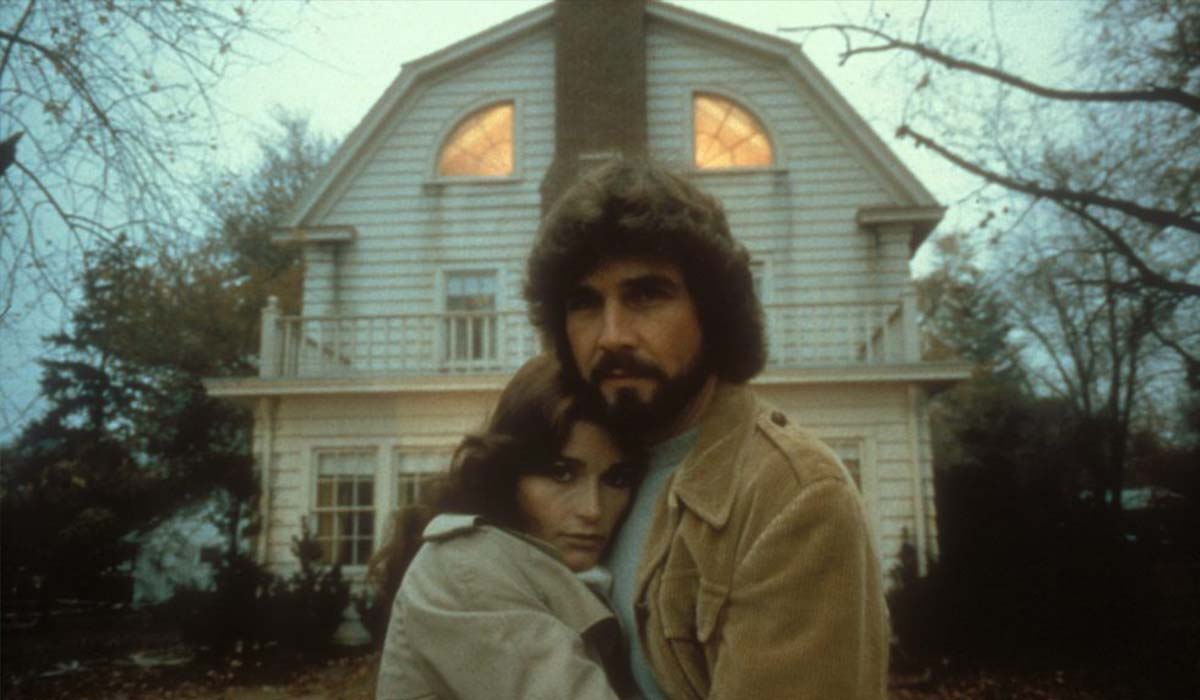 The Horror of the Amityville Series

Horror fans like to laugh at the wacky turns taken in the Halloween and Texas Chainsaw Massacre franchises, with constant resets and retcons that have turned them into "Choose Your Own Adventure" style journeys. The truth is, neither of them have anything on the Amityville series, which consists of nearly thirty (!) official and unofficial films that have little to nothing to do with one another. To be fair, many of them do not pretend to have any relation; the word "Amityville" is just the name of a town, which isn't something one has to copyright, so outside of some creative box art that suggests a connection (usually via the house’s iconic "eye" shaped windows) they exist separate from one another. Still, you'd think that, out of over two dozen films at least some might have a genuine connection, even if by accident, right? Nope! There's nothing! But let's take a brief look at the history of this "franchise" anyway, just for fun.

No one should be surprised that the first film spawned a franchise; if not for Kramer vs Kramer sneaking in at the end of the year, The Amityville Horror would have been the highest grossing film released in 1979 (yep, it sold more tickets than Alien). James Brolin's beard, Margot Kidder's shrieks, and Rod Steiger’s Rod Steiger-ing drove 34 million ticket buyers to the box office, a substantial sum for any movie, let alone a horror film. But given the film's true-life origins, making a follow-up meant flexing the creative muscle - as well as dealing with pesky life rights issues that most traditional horror franchises do not have to worry about. No one "created" the Lutz family that was portrayed by James Brolin and Margot Kidder; they are real people who claim to have been driven out of their new home at 112 Ocean Avenue after a mere 28 days. Whether you believe them or not is irrelevant; the fact remains that they were the focus of the first film's events, and any sequel about them had to get their permission to use their names and likenesses.

This is where the problems start. After the success of the first book by author Jay Anson, the Lutzes authorized another author, John G. Jones, to continue their story with fictional tales of the ghosts still following them. Jones wrote several books over the next few years, each one less related to any real world events than the one before. The Lutzes wanted the movie’s sequel to follow Jones’ work, however the producers had already struck a deal with another author named Hans Holzer, who - inspired by the success of the film - had written a book about the DeFeo family, the house's previous owners. Said producers wanted the second film to cover that 1974 tragedy (in which the DeFeo's oldest son, Ron Jr, murdered the other six members of his family while they slept), which angered Lutz and led him to sue them.

Alas, Lutz lost the fight, and 1982's Amityville II: The Possession was indeed a prequel film. in what we can now call true Amityville fashion it was confusing, because the first film mentioned the DeFeos, but this movie, from a script by Tommy Lee Wallace (no stranger to giving audiences unrelated sequels) renames them as the Montellis for reasons unknown*, and even contradicted what little we learned about their ordeal in the first film, as if they were a completely different family that nevertheless experienced the exact same things. As for the Lutzes, after losing the case they had no future involvement with the sequels, and The Possession had no mention of them beyond a note on the poster saying "This film has no affiliation with George and Kathy Lutz."

It wouldn't be the last time these movies had curious disclaimers. While nowhere nearly as successful as the first film, Amityville II performed well enough to inspire a third entry, one that took advantage of the 3D craze that was running rampant at the time. Normally the "3" part of a 3D title doubled as its numbered installment (i.e. Jaws 3D, Friday the 13th 3D), and one would think that was the case here, but if you look closely at the poster, you'd see at the very bottom "This picture is not a sequel to the pictures 'The Amityville Horror' or 'Amityville II: The Possession", which is even more confusing. The Lutz part of it makes sense, but why couldn't it be connected to (the very fictionalized) The Possession? Instead it just once again focuses on 112 Ocean Avenue, with a new (fictional) family moving into the home where all those wacky things happened and, sure enough, dealing with a number of supernaturally charged occurrences themselves.

By now audiences stopped caring, and it tanked - though it didn't stop the franchise for good. Instead they just scaled it back from theatrical releases, and in 1989 we were given Amityville 4: The Evil Escapes, a made for TV movie starring Patty Duke. Loosely based on Jones' third novel, it concerned objects from the house - in this particular case, a lamp - being sold at a yard sale and spreading the curse to new homes/families. In my opinion it's kind of a genius way to continue the series, as no one would have to worry about the Lutzes (it's never even explained whose items are the ones being offered at the yard sale, we just assume it's theirs) and they wouldn't even be beholden to the house on Ocean Avenue anymore. The next three sequels followed suit, focusing on a haunted clock (Amityville 1992: It's About Time), mirror (Amityville: A New Generation), and dollhouse (simply Amityville: Dollhouse), which allowed for new locales (New Generation took place in an inner city) and an ever changing cast, which kept costs down.

Honestly, they could have stuck with this premise for years. The films were hit or miss, but there was - for the first time - some semblance of a plan and some basic consistency. But after 1996’s Dollhouse the series lay dormant for nearly a decade, until the producers at Platinum Dunes, having had so much success with their remake of Texas Chainsaw Massacre in 2003, set their sights on the property. The Amityville Horror (2005), starring Ryan Reynolds and Melissa George as the Lutzes, was a pretty standard remake of the 1979 original and it performed quite well at the box office, though as with most of their other remake revivals the Platinum Dunes team didn't bother with a sequel. Perhaps the real life death of Kathy (in 2004) and George (2006) had them thinking it would be in poor taste to finally make more movies about them now that they were no longer around? Or maybe it was because George managed to sue some filmmakers one last time before his death (he took issue with the script fictionalizing things; apparently, only George Lutz was allowed to make things up about what happened there. He lost that case, too). Instead, crafty producers just started tossing the word "Amityville" into titles, regardless of whether or not it made sense with even the most vague history of the Defeo or Lutz stories.

Again, most of these movies do not pretend to be part of the franchise, and many of them don't even bother to explain the connection that gave it the title. One in particular, Amityville Island, simply seems to be cashing in on the occasional confusion between Amityville and "Amity", the name of the town in Jaws (the tagline is borderline genius; "For God's sake, get out of the water!"). There's even something called Amityville Vibrator, which I can almost guarantee will not be playing at any Screamfest events anytime soon (I might watch it myself out of curiosity...). So while there are indeed around thirty movies with “Amityville” in the title, the "official" series consists of a mere nine films: the original three theatrical releases, the four "haunted object" installments, the remake, and a 2017 Dimension effort titled Amityville: The Awakening, which boasts a decent cast (Jennifer Jason Leigh, Bella Thorne, Kurtwood Smith) and can proudly claim to have the series' highest Rotten Tomatoes score at (oof) 30%, but is probably better known for its ever changing release date that saw the film shelved for nearly three years before finally being dumped to a handful of theaters in October of 2017. True to form, despite being considered an "official" installment, it didn't exist alongside any other entry in the series - in fact, its characters reference some of the previous movies AS movies, setting it in a different universe entirely.

Perhaps if the Lutzes could have convinced the producers to follow their story as depicted in Jones' novels, the series would have remained more consistent and maybe even found more box office success. The only two genuine hits in the series (the 1979 original and its 2005 remake) were the two about them, after all, so the public certainly found them more compelling than any other characters that were created in their absence. Alas, with George being so difficult to work with (he even sued one of Kathy's children at one point), you can't blame the producers for wanting to ignore him and capitalize on the name itself. It's just a shame none of their attempts ever struck the same chord, though with three "Amityville" titles in 2020 alone, I suspect they may never stop trying.

*The DeFeos would get their due eventually though; 35 years later, Daniel Farrands wrote and directed The Amityville Murders, which restored their name and retold their story slightly more faithfully, but tipped its hat to Amityville II by bringing “Montelli” actors Diane Franklin and Burt Young into its cast in different roles.

Get tickets for The Amityville Horror Drive In Screening on Thursday Nov 19th, 2020.