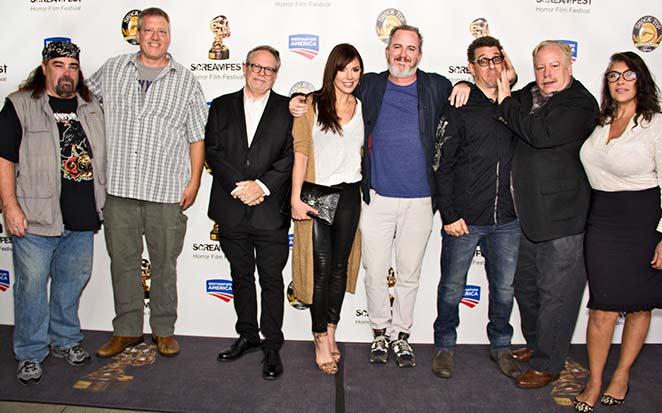 Ten years ago The Screamfest Horror Film Festival held the world premiere of Feast, a quirky, off-beat horror film and although the movie has gone on to become a cult classic, it never really got the recognition it deserved.

On Friday October 16th Screamfest held a ten year anniversary screening of the film, and after ten years, Feast holds up very well -- sort of like visiting your favorite Halloween Store. Feast is definitely a film that deserves to be revisited by the horror community.

Feast is about a group of mostly horrible people trapped in a remote bar who must fight for their survival when a bunch of very large, very strong monsters show up to eat them. What makes Feast stand out for me is how subversive and unpredictable it can be. Not all of the good characters survive, and not all of the bad characters redeem themselves. Sometimes good characters do bad things, and sometimes bad characters do good things. There is a feeling of chaos throughout the movie, both in the disjointed way the action scenes are shot, as well as the freewheeling way the story unfolds.

Feast was produced as part of season three of HBO's Project Greenlight, and the entire production was captured in minute detail in the reality TV show.