Central Intelligence will open the 20th annual American Black Film Festival on June 15 in Miami. The film, a New Line Cinema and Universal Pictures presentation distributed by Warner Bros, opens in theaters June 17. Starring Dwayne Johnson and Kevin Hart, it follows a lethal CIA agent and one-time bullied geek (Johnson) as he heads home for his high school reunion. Hart plays his former “big man on campus” classmate who misses his glory days. Amy Ryan, Aaron Paul and Danielle Nicolet co-star. The fest runs June 15-19 and features panels with Nate Parker discussing The Birth Of A Nation and Will Packer and cast about the making of Almost Christmas.

The 16th annual Screamfest will take place October 18-27 at the TCL Chinese 6 Theatres in Hollywood. Actress Lydia Hearst (Condemned, #Horror) will serve as ambassador for the festival. America’s longest running horror film festival, Screamfest 2016 will accept submissions for through August 1. All screenings will be open to the general public. The festival is best known for discovering Paranormal Activity in 2007, with other past premieres including 30 Days Of Night, Let The Right One In, The Grudge and The Human Centipede. 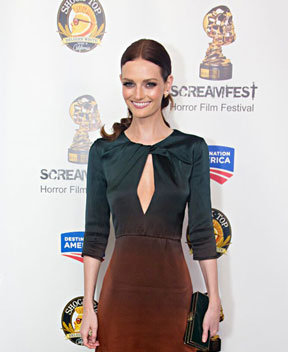 America's largest and longest running horror film festival, Screamfest, is proud to announce that the 16th annual event will take place from Oct. 18-27, 2016 at the TCL Chinese 6 Theatres in Hollywood. Actress Lydia Hearst (Condemned, #Horror) will serve as ambassador for the festival. "I'm honored to serve as ambassador for Screamfest," said Hearst, whose film Condemned premiered at last year's festival. "Screamfest provides an amazing platform for filmmakers and actors like me to showcase our latest work and to receive direct feedback from the horror and genre community." Screamfest is currently accepting submissions for the festival through Aug. 1, 2016. Films from around the globe are expected to screen at the festival. Winners will receive a 24 karat gold dipped skull trophy designed by the legendary, Academy award-winning special make-up effects creator, Stan Winston, who partnered with the festival until his passing. All screenings are open to the general public. "We're excited to showcase the new work of American and international filmmakers for horror movie enthusiasts," said (co-founder Rachel) Belofsky. "Over the last 16 years, we have launched careers and helped garnered distribution for filmmakers. We're proud of the work we showcase year after year." The festival is best known for discovering Paranormal Activity in 2007. Other past premieres include 30 Days of Night, Let the Right One In, The Grudge, The Fourth Kind, The Collection, Trick 'r' Treat, The Human Centipede and Diary of the Dead. Wes Craven, John Carpenter, Sam Raimi, Clive Barker, Eli Roth, James Wan, Zack Snyder, William Friedkin, John Landis and James Gunn are just (some of the) filmmakers who have supported the festival year after year.