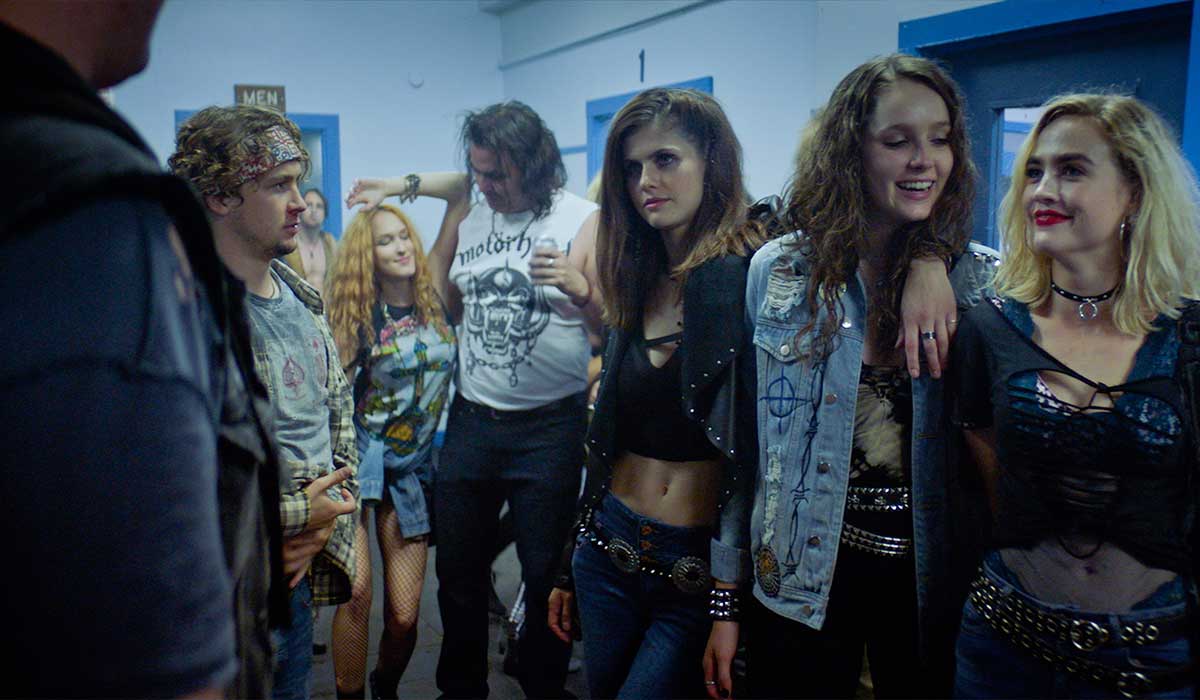 “We are excited to bring audiences the best the genre has to offer from the independent horror film community.” -- Founder & Festival Director Rachel Belofsky.

Awards are given in the categories of Best Feature, Directing, Cinematography, Editing, Acting, Makeup, Special Effects, Visual Effects and Musical Score. In addition, there are special categories for Best Animation, Best Short, Best Documentary and Best Student Film.
The second-wave of the 2019 feature film lineup is as follows:

City of Ashes (Columbia) World Premiere
Directed by Jhon Salazar
Written by Jhon Salazar
Produced by PRODUCCIONES VERDEBICHE SAS
A Colombian farmer, faced with the sterility of his wife, wants to adopt his orphan niece, but in order to achieve this he must destroy the demon of the town who is opposed and who, without knowing, had always intervened negativity in his life.
Cast CATERINE ESCOBAR, ALEX ADAMES, LUIS FERNANDO HOYOS, PATRICIA TAMAYO, JORGE HERRERA, PATRICIA CASTAÑO, ISABELLA GARCÍA

Hanna’s Homecoming (Germany)
Directed by Esther Bialas
Written by
Produced by
After three years at boarding school, Hanna is returning home to her little village to help her father's butcher’s shop during her break. Soon she learns that she is not welcome in the village. Everyone remembers the horrific news story about her mother’s death which was followed by the discovery of three dead men in the marsh. While superstition rules the village, everyone believes her mother was a witch and had lured these men into the marsh directly to their death. While struggling to make friends, she meets the extroverted city girl Eva. Thinking she has finally found a friend, scary accidents are starting to happen around her … while Hanna’s confidence and with that her “power” starts to grow.
Cast: Valerie Stoll, Milena Tscharntke, Godehard Giese

Here Comes Hell (UK) LA Premiere
Directed by Jack McHenry
Written by Jack McHenry, Alice Sidgwick
Produced by Olivia Loveridge
A 1930s dinner party descends into chaos and carnage when the evening entertainment accidentally leads to the opening of Hell. Rivalries and old friendships are put to the test as the guests must battle ghosts, ghouls - and one another - before it is too late.
Cast Margaret Clunie, Jessica Webber
Porno (USA) LA Premiere
Directed by Keola Racela
Written by Matt Black, Laurence Vannicelli,
Produced by: Chris Cole, Sarah Oh
When five teen employees at the local movie theater in a small Christian town discover a mysterious old film hidden in its basement, they unleash an alluring succubus who gives them a sex education...written in blood.
Cast Evan Daves, Larry Saperstein, Jillian Mueller, Glenn Stott, Robbie Tann, Peter Reznikoff, Katelyn Pearce

RABID (USA) North American Premiere
Directed by: Jen & Sylvia Soska
Written by: Jen & Sylvia Soska, Jon Serge
Produced by: Jon Vidette, Paul Laldone, Michael Walker
Aspiring fashion designer, Rose Miller, has her dreams torn away into
a nightmarish reality when a freak accident leaves her horribly
disfigured. After receiving a miracle procedure involving an
experimental skin graft from the mysterious Burroughs Clinic, Rose is
transformed into the beauty of her dreams. But nothing comes
without a cost and Rose begins to feel terrifying side effects that tear
at her last threads of sanity. Still driven by her ambition she struggles
to keep up appearances as the procedure reveals that something
much darker than she ever could have imagined is being brought to
the surface. What price will Rose have to pay to have everything she
ever wanted? It may just cost her her humanity.
Cast: Laura Vandervoort, Benjamin Hollingswoth, Phil Brooks, Stephen McHattie

The Soul Conductor (Russia) North American Premiere
Directed by Ilya Maksimov
Written by Anna Kurbatova, Alexander Topuria
Produced by Mikhail Kurbatov, Anna Kurbatov, Grigoriy Podzemelnyy
Katya is a conduit between the world of the dead and the world of the quick, and she helps earthbound souls to regain peace. It’s difficult relationships, between Katya and her ‘guests’, for ghosts, too, like real people, have human emotions, habits and sentiments, and they long to find eternal peace.
Cast: Aleksandra Bortich, Evgeniy Tsyganov, Vladmir Yaglych, Aleksandr Robak

The Wave (USA) West Coast Premiere
Directed by Gille Klabin
Written by Carl W. Lucas
Produced by Joshua Bunting, Robert Dehn, Carl W. Lucas, Monte Young
Frank, an opportunistic insurance lawyer, thinks he’s in for the time of his life when he goes out on the town to celebrate an upcoming promotion with his co-worker, Jeff. But their night takes a turn for the bizarre when Frank is dosed with a hallucinogen that completely alters his perception of the world, taking him on a psychedelic quest through board meetings, nightclubs, shootouts, and alternate dimensions. As Frank ping-pongs between reality and fantasy, he finds himself on a mission to find a missing girl, himself… and his wallet.
Cast: Justin Long, Donald Fiason, Tommy Flanagan, Sheila Vand, Katia Winter, Sarah Minnich, Bill Sage

We Summon The Darkness (USA) West Coast Premiere (Closing Night Film)
Directed by Marc Meyers
Written by Alan Trezza
Produced by Kyle Tekiela, Mark Lane, Christian Armogida
In 1988, Three best friends Alexis (Alex Daddario), Val and Beverly embark on a road trip to a heavy metal music festival where they bond with three guys in a band. After the show, the group heads off to Alexis’ parents' secluded country home for an afterparty. What should be a night of fun and youthful debauchery instead takes a dark and deadly turn. With killers on the loose, can anyone be trusted?
Cast: Alexandra Daddario, Keean Johnson, Johnny Knoxville, Logan Miller, Maddie Hasson, Amy Forsyth, Austin Swift

Wounds (USA) West Coast Premiere
Directed by Babak Anvari.
Written by Babak Anvai
Produced by: Lucan Toh, Christopher Kopp
Will (Armie Hammer) is a bartender in New Orleans. He has a great job, great friends, and a girlfriend, Carrie (Dakota Johnson), who loves him. He skates across life’s surface, ignoring complications and concentrating on enjoying the moment. One night at the bar, a violent brawl breaks out, which injures one of his regular customers and causes some college kids to leave behind a cell phone in their haste. Will begins receiving disturbing texts and calls from the stranger’s phone. While Will hopes to not get involved, Carrie gets lost down a rabbit hole investigating this strange malevolence. They’ve discovered something unspeakable, and it’s crawling slowly into the light.
Written for the Screen and Directed By Babak Anvari the Award-Winning Director of Under the Shadow.
Wounds made its world premiere at the Sundance Film Festival in January 2019 and screened at the Cannes Film Festival in the Directors Fortnight section in May 2019.
Cast: Armie Hammer, Dakota Johnson, Zazie Beetz , Karl Glusman, Brad William Henke

Passes and Tickets for the 2019 Screamfest Horror Film Festival:
Advance selection ticket packages are now on sale. All packages can be purchased online at https://screamfestla.com/festival-passes

Single tickets cost $11.00 and will go on sale at the end of September.

About the Screamfest Horror Film Festival:
Formed in August 2001 by film producer Rachel Belofsky, Screamfest Horror Film Festival is a 501(c)(3) non-profit organization that gives filmmakers and screenwriters in the horror and science fiction genres a venue to have their work showcased in the film industry. Among the numerous films that have been discovered and/or premiered at the festival include “Tigers Are Not Afraid.”, “Paranormal Activity,” “30 Days of Night,” “Trick ‘r Treat” and “The Human Centipede.” For more information, visit https://screamfestla.com or email [email protected]