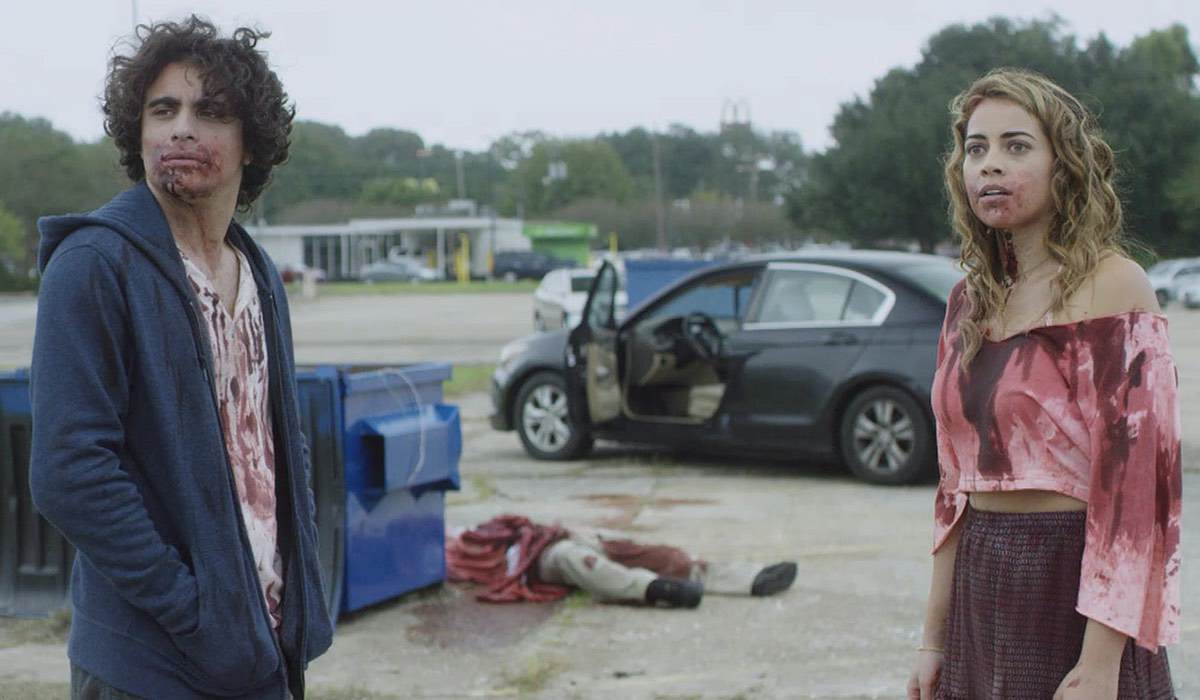 Here’ the first wave of the lineup:

EAT, BRAINS, LOVE (Opening Night)
Directed by Rodman Flender
Written by Mike Herro, David Strauss
Cast: Jake Cannavale, Angelique Rivera, Sarah Yarkin, Patrick Fabian
Produced by Tommy Coriale, Tony DiSanto, Brian Hoff, Van Toffler, Cody Zweig
Based on the living dead road trip novel by Jeff Hart, a gory, funny, surprisingly engaging zom-rom-com from Rodman Flender, director of IDLE HANDS. The good news: Jake's dream girl, Amanda, finally knows his name. The bad? It's because they both contracted a sexually transmitted mysterious zombie virus and devoured the brains of half their senior class. Now both are on the run from Cass, a teen psychic sent by the government's top-secret Necrotic Control Division to track them down as they search for a cure while weighing up the existential question of who really deserves to be eaten alive.
North American Premiere

“Stands on its own two rotting feet as one of the funniest and most memorable teenage zombie movies we’ve seen in years. ⭑⭑⭑⭑” -David Gelmini, Dread Central

Kindred Spirits
Directed by Lucky Mckee
Written by Chris Sivertson
Cast: Caitlin Stasey, Sasha Frolova, Macon Blair and Thora Birch
Produced by Ash Christian, Michael Moran
Chloe, a single mother in a relationship with Alex, has her life turned upside down when her younger sister, Sadie, comes home after a long, unexplained absence. Though Sadie seems to want to settle in with her sister and 17-year-old niece (becoming quite a handful herself), she’s actually a deeply disturbed young woman who has a sinister agenda regarding anyone who gets between her and her big sister.
West Coast Premiere

SHE NEVER DIED
Directed by Audrey Cummings
Written by Jason Krawczyk
Cast: Oluniké Adeliyi Peter MacNeill Kiana Madeira Michelle Nolden Noah Danby
Produced by Jennifer Mesich
Lacey, a socially detached loner is cursed with immortality and her never-ending tedium of existence. In her attempts to keep her compulsions in check, she seeks out the darkest souls humanity has to offer. Lacey must now face her own inner demons while simultaneously finding her next meal.
US Premiere

SWING LOW
Directed by Teddy Grennan
Written by Teddy Grennan
Cast: Annabelle Dexter-Jones, Bruce Dern, Robert Longstreet, Ross Partridge, Michael Weaver
Produced by Marsha Oglesby, Heath Franklin, Teddy Grennan, Bennett Krishock
When a nature photographer explains to the Police how she fought her way out of the Watchatoomy Valley, they dismiss her crazed and violent story as a meth-induced nightmare. But when they discover that she's telling the truth, it's too late.
Los Angeles Premiere

Trick
Directed by Patrick Lussier
Written by Todd Farmer, Patrick Lussier
Cast: Omar Epps, Ellen Adair, Kristina Reyes, Jamie Kennedy, Tom Atkins
Produced by Ita Kennedy, Ellen S. Wander
On Halloween night in 2015, Patrick “Trick” Weaver massacred his classmates at a costume party. After being arrested, he managed to escape police custody, but not before being shot five times by Detective Mike Denver (Epps). Everyone believes Trick must be dead, but when a masked killer reappears the following Halloween, and every Halloween after that, they realize the nightmare is not over. With Trick wreaking havoc and killing innocent people in increasingly terrifying ways, Denver will stop at nothing to finish what he started and bring the carnage to an end.
North American Premiere

ABOUT SCREAMFEST HORROR FILM FESTIVAL
Formed in August 2001 by film producer Rachel Belofsky, Screamfest Horror Film Festival is a 501(c)(3) non-profit organization that gives filmmakers and screenwriters in the horror and science fiction genres a venue to have their work showcased in the film industry. Among the numerous films that have been discovered and/or premiered at the festival include “Tigers Are Not Afraid.”, “Paranormal Activity,” “30 Days of Night,” “Trick ‘r Treat” and “The Human Centipede.” For more information, visit www.ScreamfestLA.com or email [email protected]