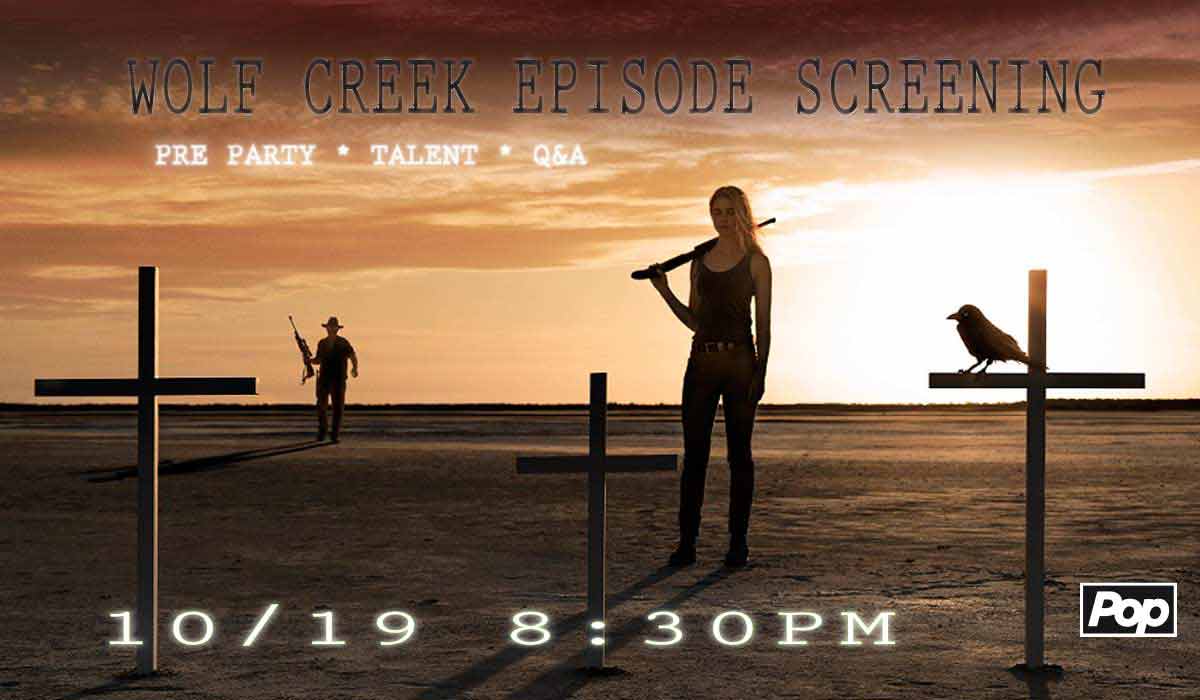 Got your ticket? Join us for a cocktail reception at Sid's Bar and good times with the Dead Right Horror Trivia Night gang! Meet Murdering Psychopath Mick Taylor at a Special Screening of Pop’s Wolf Creek, Inspired By The Cult Movie - Q&A moderated by the Festival Ambassador Lydia Hearst.

Get FREE tickets to this amazing event by clicking on the GET TICKETS button and submit the form. Come to the WILL CALL table located in the Chinese 6 Theater lobby to check in. Then join us for the PRE PARTY at Sid's Bar located in the theater lobby.

30,000 people go missing in Australia each year, with 90 percent found within the first month. The rest are never seen again... Murdering psychopath Mick Taylor (John Jarratt), one of the most terrifying killers ever depicted on the big screen, will be at Screamfest on Wednesday, October 19 at 8:30 PM for a special screening of the WOLF CREEK television series: www.poptv.com/wolfcreek Inspired by the cult movie—which was named one of “The 25 best horror movies since 2000” (AV Squad), one of “The 100 Best Horror films” (Time Out), and one of “The 25 Best Horror Movies Since The Shining” (Vulture)—the six-part television event, WOLF CREEK, is a psychological thriller premiering Friday nights at 10:00 PM, ET/PT (starting October 14) exclusively on cable network Pop.

This primetime event at Screamfest will include a screening of two back-to-back, uncut episodes followed by a one-on-one chat with WOLF CREEK star John Jarratt. Fan engagement and photos with John will take place at the TCL Chinese 6 Theatres.

ABOUT POP: Fans don’t sit at the outskirts of pop culture making snarky comments. They live right smack in the middle of it, sharing, creating, and connecting their passions with others. At Pop, fans finally have a destination that celebrates the fun of being a fan. Fans aren’t even fans anymore — they’re gladiators, tributes, human beings and blockheads. Seen in more than 80 million homes, Pop gives fans a dedicated channel that loves being a fan as much as they do. A channel that respects talent over celebrity. A channel filled with optimism, passion, humor, and excitement. A channel that understands the fun doesn’t stop when the credits roll… it’s really just the beginning. Pop is a joint venture of CBS Corporation (NYSE: CBS.A and CBS) and Lionsgate (NYSE: LGF). The partnership combines CBS’s programming, production and marketing assets with Lionsgate’s resources in motion pictures, television and digitally delivered content. Pop’s ownership structure is comprised of the company with the #1 broadcast network and many of the top first-run syndication series (“Entertainment Tonight,” “The Insider”) and the studio that produces and distributes the blockbuster “Hunger Games,” “Twilight” and “Divergent” franchises and produces such award-winning TV series as “Mad Men” and “Orange is the New Black.”